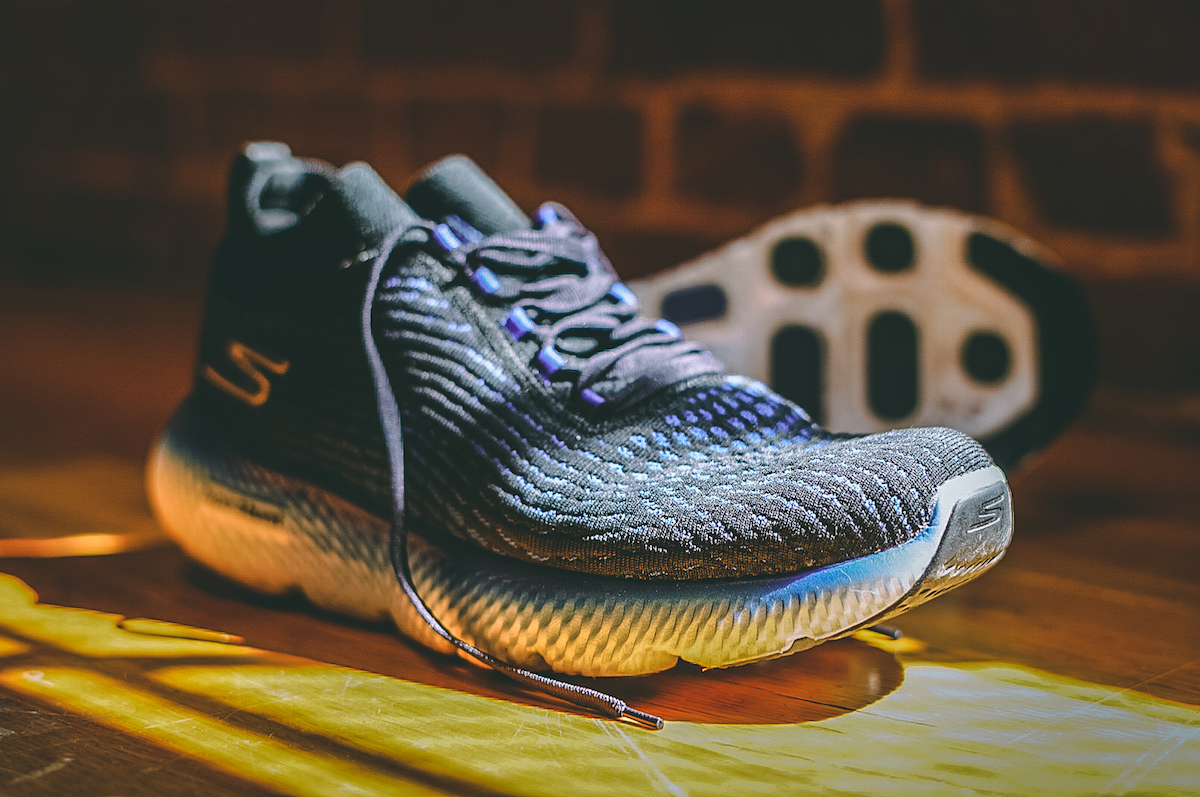 Thomas: Skechers may have the best midsole cushioning on the market. It is light, responsive, and durable. It is called Hyper Burst and it is in the Maxroad 4.

Robbe: Despite writing for BITR for a couple of years now, this is actually my first time running in a Skechers road shoe. To be honest, I’ve been dying to try them, I just haven’t had the chance. Thomas: There is no denying that the Hyper Burst is the most defining characteristic of the Maxroad 4. The same midsole material is used in the Razor 3 and the Speed Elite, but in the Maxroad 4, there is just a lot more. The bounce is noticeable out of the gate. You may find yourself bounding over the pavement for the first quarter-mile of your run.

If you ran in any of Skechers’ early models of the Go Run series, the rocker shape of the midsole and the pronounced “M-Strike” feature will be familiar. What the M-Strike rocker sole does is make it very difficult to heel strike. The middle of the shoe will land before the heel can.

Even the grippy outsole rubber dot configuration is reminiscent of the early Go Run models. The Hyper Burst does a phenomenal job of cushioning your legs and providing loads of energy return.

Robbe: There’s been a lot of people stoked about this shoe, so my interest was piqued, but my expectations were so-so. I mean, I hadn’t run in Skechers before, so in some ways, they were still, you know—Skechers. I threw all those preconceptions out shortly into my first run.

Having not experienced the Hyper Burst midsole before, I gotta say— it was a fun first experience. It felt like a plush diving board underneath, just tons of bounce with great cushion for the pushin’. And it’s a very lightweight shoe for such maximum cushioning. Combine the lack of weight with the Hyper Burst bounce, and I felt like I could move pretty seamlessly from easy runs into tempo territory.

I loved the fit of the compression knit upper. It really molded to my foot; not much had to be done lacing-wise.

Honestly my second favorite part behind the Hyper Burst may have been the grip of the outsole. It has a bunch of rubber circle and oval pods that kind of look like Pac-Man threw up all over the shoe, but it works really well. It felt like I could just rip around corners. Granted, it was somewhat mitigated by the insecurity of the upper. More on that below. Thomas: The upper of the Maxroad 4 is a miss for me. It is stiflingly warm and doesn’t provide enough structure to keep your foot locked down over the midsole. During a 16-mile run in the Maxroad 4 my foot felt like it was in an Easy-Bake oven. The combination of my foot sweat and slight shifting of my foot led to a hotspot behind my big toe and the pad behind it.

I mean, sure, temperatures and humidity don’t help the situation, but I’ve been running in lots of models this summer. There seem to be more issues with the Maxroad 4 than my other shoes. Personally, I need a more breathable upper for a shoe that is meant to go long.

Robbe: Couldn’t agree more on Thomas’s thoughts on the compression knit upper. It is warm like a cable knit sweater meant for the coast of Newfoundland. At no time is that kind of sweater meant to be worn in humid Mid-Atlantic summers. Good thing the Maxroad 4 is coming out in the fall.

While I loved the fit of the upper, it did not provide much support. I definitely felt insecure in the ankles, especially with the high stack height.

I’m pretty sure this shoe is ugly as hell, but I’ve seen pictures of myself wearing it, and somehow it *kind of * works. At least, the plum crazy purple women’s version that I was given does. Thomas: Skechers has a shoe coming out that Meaghan has been testing for their development team. It will be a shoe that makes a lot of people happy. For me it will be able to do what the Maxroad 4 is intending to do. It is the Go Run Ride 8 Hyper. The upper is sweet! The amount of Hyper Burst midsole is just right. The great thing about the Hyper Burst is that you don’t need a lot of stack height to give you ample cushioning.

The shoe fits true to size and has a 6 mm drop.

Robbe: I definitely enjoyed this shoe more than Thomas; however, I was also a Skechers road shoe virgin. I’m still in the honeymoon phase so I found the ride to be just what I was looking for in a shoe— bouncy and plush without being too soft. Eyes up here, we’re still talking about shoes.

I’ll definitely be pulling this out for more runs in the fall in winter, but I’m also wondering if the Go Run Ride 8 Hyper will be the true Excalibur in the Skechers lineup. If you can’t wait for that, pick up the Maxroad 4 Hyper at Running Warehouse for $124.95 (which btw, is totally reasonable).