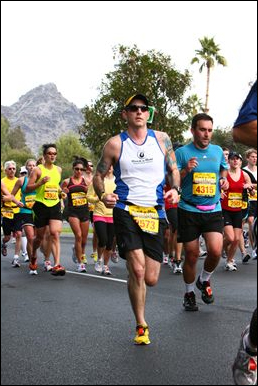 I will cut to the chase… I had a great time.

January in Baltimore is bitter cold and dreary as hell.  The idea of getting out of town and heading to warm temps sure is appealing.  From the moment we touched down in Phoenix our spirits were lifted.  We peered out of the shuttle taking us to our rental car and saw blue skies and green grass.  When we picked up our car and started to head towards Scottsdale where we were staying, I couldn’t help but notice how clean everything looked compared to the east coast.  There were no pot holes!  We had booked a vacation around the marathon to get a little RNR (rest and relaxation not Rock n’ Roll) and were staying at the Boulders Resort.  It was a little out of the way but totally worth the extra driving.  It was beautiful there.  You are out in the middle of the desert with cactus, big rocks, mountains in the distance, we were totally transported to another world while on the resort property.

Our schedule was pretty packed but allowed for downtime too.  The second day there, I hit the running expo with Cindy.  I love the atmosphere at the expos and I am a kid in a candy store with all the running gear.  I still haven’t found an expo that has topped the Chicago Marathon Expo, not even the New York Marathon was as good.  The PF Chang’s RNR Marathon Expo was just okay.  Maybe it is because Brooks Running is the main sponsor or maybe it is something else but, other than Brooks the other shoe manufactures were not there in full force.  After the expo we headed back to the Boulders and went to the pool to chill.  I love sitting by a pool when I know it is FREEZING where I would normally be.  I also can’t tell you the last time I was able to sit by the pool and just relax.  Since my son Theo, I have been on baby duty when it’s pool time.  Later that evening we went to meet up with some dailymilers for dinner.  This was a lot of fun.  I spend so much time interacting with the group online that it is great to get a chance to sit with them and break bread.  I have met some amazing people through dailymile.

Saturday, the day before the race, Cindy wanted to check out some of the shopping in Scottsdale so we did a little bit of walking around and then got back to the pool.  I loved the pool at the Boulders, did I mention that.  My nerves were calm the whole way leading up to this marathon.  Now for some reason, I started getting a little bit jittery.  I wanted to do well in this marathon, I had my sights set on a new PR and wanted to finish in 3:40.  I didn’t run New York smart two months prior to this marathon.  I went out too fast, hit the wall around mile 16 and battle to finish 3:57.  I spent 10 miles mentally beating myself up, it sucked.  My PR going into the PHX marathon was 3:45 with a caveat – I ran the Baltimore Marathon under an injured runners bib as a training run 3 weeks before New York City’s marathon.  I have no official record of the PR.  I wont get in the debate of ethics of running under someone’s bib.  The sport needs to figure out more ways to solve race bib transfer options.  Anyhow, The looming memories of the crushing NYC marathon performance filled my head with some self doubt.  Steve Speirs was running the PHX marathon too, I couldn’t decide what I wanted for a pre-race dinner so I talked to him.  Steve eats a Hamburger with a pint of Guinness, he is a sub 3 hr. marathoner, I figured if it works for him I will give it a shot.

Sunday came after some rough sleep.  I had a head cold all week and it seemed to be getting worse.  Cindy dropped me off at the finish where we were shuttled to the start in buses.  I met up with Brooke, Jenny, Steve and Ally before the start.  Jenny, Brook and I were all hoping to finish around 3:40 so we stayed together and got into the corral where the 3:40 pacing group was gathering.  This was my plan, I would stay with the pace group until mile 16, if I had gas in the tank I would try to push a little harder.  The weather at the start was perfect for running 48º and overcast.  It was the first time I saw clouds since coming to Arizona.  The gun went off and we started running full of excitement and energy.  The course was as promised, it felt really flat.  My local running routes in Baltimore are filled with hills so I felt really prepared for this flatter course.  There were some stretches with some slight uphill grades but nothing too severe.  Jenny and I talked quite a bit the first few miles, it really helped those miles go by.  I was feeling boxed in by the jockeying other runners were doing to stay close to the 3:40 pacer.  The group had created quite a dense pack.  I found myself wanting to get away from them.  There were only two options, fall behind the group and make some comfortable space or get out in front of them.  Around mile 11, I decided to get out in front.  I didn’t look back.  It was great motivation to know the group was on my heels.  When I ran through support crowds, I would hear them say “I see the 3:40 sign here they come.”  Not wanting to get passed by the group I would dig a little deeper.  There were plenty of water stops, I was very happy with the way they spaced them out on the course.  There were not enough GU stations.  Just one for the whole marathon and it was deep in the race, around mile 23 I think.  As I finished the last 3 miles, I was beat but still in it and still pushing.  I gave this marathon my best effort.  I felt good about how I managed the race too.  The whole race different people that have sent me well wishes and support scrolled through my mind.  It is amazing what the people on dailymile do for each other in the way of motivation.  I ran with a lot of friends in my head.  When I crossed the line I saw that I had a new PR at 3:38:48!  I was super tired and super happy.  The sun was shining +70º and it was time to meet up with my wife and the other runners.  Everybody seemed to have had a great day.  Steve and Jenny both PR’d and Jenny qualified for Boston.  It was a great day.

Later, Steve, Ally, Jenny and Brooke met Cindy and me out for some Mexican food.  Everyone seemed so relaxed.  I really will have great memories from this marathon and consider it a great one to do especially in the middle of the winter.  I am really excited that next month I am heading back to Arizona to run The Ragnar Del Sol Relay event with a great group of dailymilers.  Arizona is a great place to visit.

Very special thanks to my Coach, Coach Caleb for your help with training and helping me believe.

Believe in the run.

9 Best Running Shoes for Beginners: We Got You Covered

Brooks Launch GTS 9 Review: A Ravenna by Any Other Name