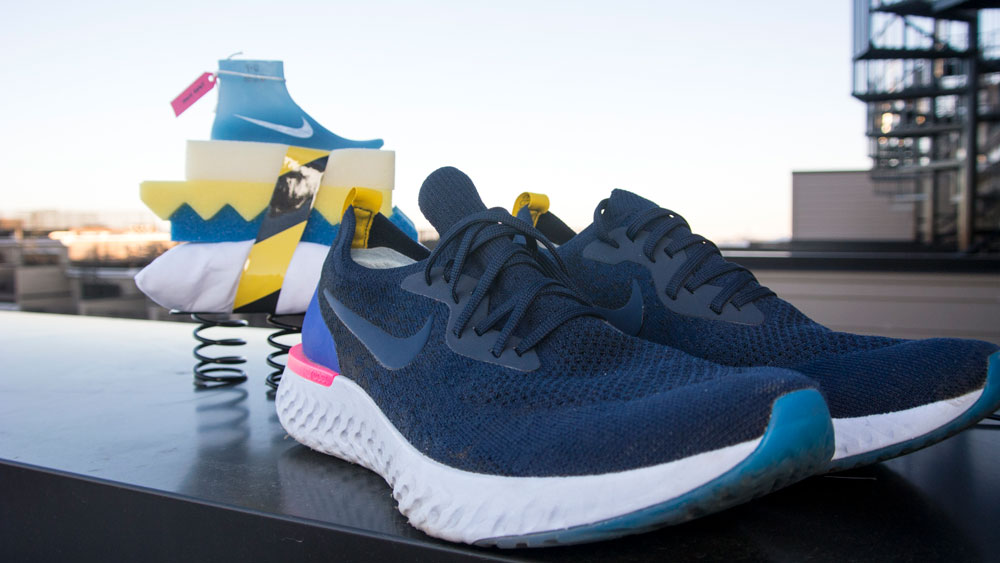 When we review a shoe on Believe in the Run, you can trust that we have run at least 20 miles in the trainer before giving you our opinion. There are three factors that influence when we do the minimum miles on a shoe. First, if the shoes suck we don’t want to run in them. Second, we have a lot of shoes that we need to review. Finally, the shoe might be right for a particular runner, but not ideal for our preferences.

For the Nike Epic React review, I had 24 miles on them in the first two runs, but I like them so much that I picked them to run in over and over the last week and a half. Even with rotating a couple of other shoes in, I was able to get over 60 miles in the Epic React, including an 18-mile run and a 20-mile run. I just love running in this shoe. Thomas: From the marketing, I was expecting a spongy cloud-like feel to the midsole. While the React midsole is soft, it isn’t sloppy. The React reminds me of the LunarEpic feel, cushioned but lively. Upon landing the shoe gives, but then it can feel almost firm on take off. It is a dynamic feeling through your stride. People want to compare it to BOOST, but it is a better material by far. React is lighter and more flexible. My size 10.5 weighs 8.45 oz. / 239 grams the Epic React fit true to size. While there is a ton of hype around the React midsole, the upper is getting overlooked.

The Flyknit upper on the Epic React is spectacular. When you first put the Epic React on, it might feel a little snug, but the Flyknit is stretchy and begins to give a custom fit. It is sock-like with an integrated tongue. The laces are reinforced by welded overlays, but you don’t have to tighten the laces that much. Just let the Flyknit do the work. The heel counter does its job keeping your foot secure. For the most part, the whole upper disappears.

The weird thing about running in the Epic React was how much effort the runs felt like compared to the paces. At the end of my runs, I was surprised to find that I had been running quicker than I had perceived. Doing easy runs, I would check my watch expecting high 8-minute mile paces and find low 8s and even some 7s. After workouts, my legs also felt fresher after wearing the Nike Epic React.

Erin: We’ve all heard the hype around this shoe, and guys, c’mon. GUYS. It’s that good. Before I dive into the details, though, let’s get a few things out of the way. First, I am not what you’d consider a Nike fangirl. They can do no wrong from a design standpoint, but aside from my trusty Pegasus (and if we’re going wayyyyy back, the GOAT ‘97 Spiridon), I’ve never been impressed by a Nike running shoe. The Lunar Trainer +, in particular, was a disappointment. Anyhow, second point: I bought these shoes with my own cash money, and third, no, I’ve never run in the Adidas Ultraboost or the VF4% so my review will be absent those inevitable comparisons.

A few weeks before the Epic React release, I attended a Nike EKIN University event, where we learned how React foam was developed and were treated to a brief history of Nike running shoes, starting with the master himself, Bill Bowerman. We also had a chance to make our own midsoles. My group won with our design, so if your next Nike racers are made of Styrofoam balls, hot glue, and half of a toilet paper roll, hey. You’re welcome.

On to the details: the Epic React has a 10 mm drop and weighs 6.6 ounces in a women’s 8. The midsole is a single-unit piece of React, which is Nike’s proprietary rubber-based foam. During the development period, the shoe underwent 400 trials over 17,000 miles of running. The foam is sculpted, strategically distributing firmness and cushion based on heat map data. The resulting look and feel are unique. Another unique thing about the React is that, aside from some reinforced rubber at the heel and toe, the midsole is also the outsole. This has led to questions about the durability of the shoe but based on how mine look with about 40 miles on them, you probably don’t need to worry about it.

Speaking of looks, this shoe is HOT. I have the navy colorway and I love it so much. I’m most likely going to order another pair just for wearing around. Anyway.

The Flyknit upper is a one-piece bootie construction, and I think the fit is perfect. I had to loosen the laces quite a bit, but this didn’t cause any issues with stability. Because there’s no tongue (just bootie), I was a little worried that the laces would cause some discomfort digging into the top of my foot, but I didn’t experience that at all. The pink rubberized overlay that wraps around the heel adds extra stability to the heel counter and is a nod to the design of a vintage Nike running shoe, the Air Epic.

So how does the React foam feel and perform? Well, underfoot, the foam feels…firm…and soft? Responsive…and cushioned? It’s hard to explain. My first two runs in this shoe were not great, as I was recovering from a race and running at a much slower pace, and I have to say that I wasn’t blown away at first. However, now that my legs have recovered, I can fully appreciate how great this shoe is. I’ve had several really, really great runs in them and I swear I’m running faster with less perceived effort. Specifically, it feels like my feet are spending less time on the ground. The energy return is actually noticeable to me unlike, say, the Brooks Levitate. I can’t wait to test these out in a race scenario, which I plan to do this weekend. Thomas: During the long runs when my form would fade, I could feel the 10mm drop. I land midfoot so when I get tired I can feel a bit of braking in my stride with higher drop shoes. Some people have complained that the outsole shows wear quickly. Some of that is an optical illusion, and some of it is cosmetically true. I say cosmetic because the bare outsole will get scuffed, but it doesn’t impact the performance or lifespan of the shoe.

Erin: I have 2 minor gripes. One, these are kinda hard to get on. It isn’t that big of a deal, and the more I wear them, the easier they are to pull on, but still. Something to mention. That yellow pull tab on the back? You’ll need to use it. Two, and this is a problem I’ve had with certain Nike shoes in the past, the last is aggressively curved and is very narrow at the midfoot, which was noticeable to me at first. I didn’t experience any rubbing at all, but it felt a little…twinge-y in the arch. I only experienced this during my first two runs and haven’t had any issues since. But if you have a high-volume foot and/or flat feet, just be aware that you may have fit issues. Thomas: The Epic React is my favorite shoe that I have worn in awhile, and I have worn some excellent shoes recently like the Skechers GOrun Ride 7 and the Saucony Kinvara 9. Between the way the Nike Epic React looks, feels, and performs it just dominates in every category. I enjoy this shoe so much that when I read comments about the Epic React that are less than glowing, I find myself feeling defensive. Irrational I know, but I feel that little something extra for these trainers.

Erin: I plan on wearing this shoe to death. According to Nike, that’ll be about 600 miles, so I’m hopeful that their durability promise delivers. This is a shoe that makes you want to run faster and longer, and you’ll look good doing it. Get some already!

“The energy return on these is ridiculous. I hit Thomas ecstatic after I took them out for the first time last Thursday. My legs still weren’t all the way back to normal from Club Challenge and I had just run 9 on Wednesday. What was supposed to be an easy run turned into a progression and my last mile was sub 6. Legs felt fresh. For a shoe that light to have a pop like that is special.” – Gavin Wayfarer Tabb, Faster Bastard