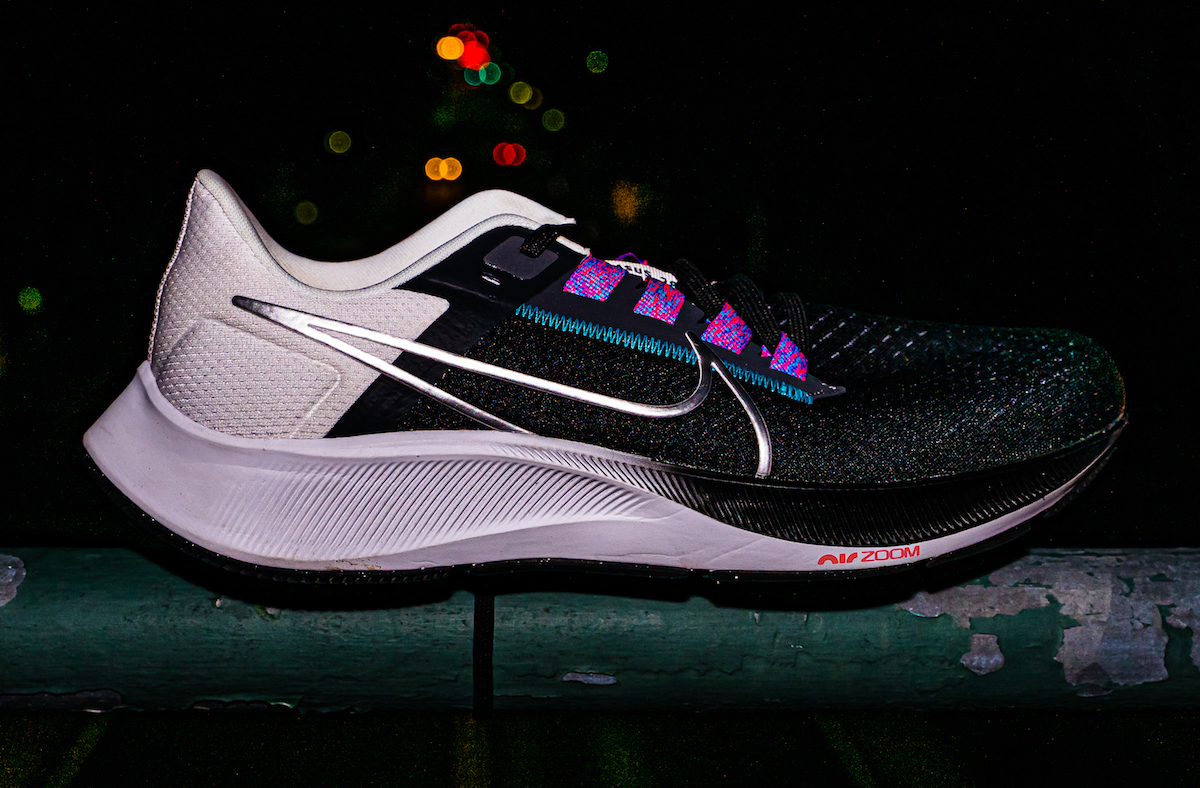 ROBBE: Nike’s Pegasus line hangs its hat on being the “workhorse with wings.” Which makes me think of Bo Jackson crossed up with X-Men’s Archangel, which is legitimately badass. And yes, I know the Pegasus is a mythical horse creature with wings. But a Bo “Archangel” Jackson is much better. You could throw a football over a mountain Uncle Rico-style, then fly away as if you just took six cases of Red Bull to the face. Anyway, enough of that, time to break some baseball bats over our heads.

Let’s do a quick rundown of the Nike Pegasus 38 (shout-out for actually keeping the name of a shoe to less than 15 characters). First off, nothing has changed about the midsole and outsole. You still have that same React midsole and a Zoom Air unit in the forefoot for a little extra pop. The biggest changes have come in the upper, which makes sense since 2021 is an in-between year for the Pegasus.

This version has more volume in the toe box, a more plush sandwich mesh (sounds delicious, but also not) material all around, and a heavily padded (and long) tongue. It also has a more normal heel counter and ankle collar. We’ll discuss a couple of the other minor changes throughout the review. Giddy-up, horsie with wings.

THOMAS: When we traveled internationally to Texas this spring (we all know that Texas is its own country), we were scheduled to do a shakeout run with a certain female Nike-sponsored athlete who was running The Woodlands Half Marathon. I hadn’t run in the Pegasus 37 in months, but I had a crispy white pair still in the box. In anticipation of the shakeout run, I packed them up. You gotta stay on brand right?!

So, that shakeout run with Ms. Hasay never worked out schedule-wise, but we still got in a Team BITR run around the grown-up Disney World known as The Woodlands, Tex. During that run, I was struck by how much I enjoyed the Peg 37; I had forgotten how much I liked the shoe. When it was time to head to Florida for a family trip a few weeks later, I packed them up and spent a lot of time in the shoe over the four days. The old flame was reignited, but a jealous lover was awaiting my arrival back home. There, inside my front door – an orange box. A swoosh logo. Inside, the Pegasus 38.

ROBBE: It’s almost like I’ve already worn it, because I kind of have. The ride is identical to the Pegasus 37, which is where most of the love for a shoe comes in. Truth be told, I ran in the Peg 37 for the review back in May, then didn’t pick it up again until November. I put it back on for a random run and was like, “Wow, I really like this shoe more than I thought.”

The combination of the React midsole and the Zoom Air unit makes for a solid ride and a nice pop on the toe-off. I just really like the one-two punch of that.

Now, I gotta say – last year’s version had its struggles. Namely in the heel slippage (which got better once the insole/midsole compressed), and also with the shallow toe box that reminded me of the cramped feeling I get in the Terra Kiger trail shoe. All of those things have been fixed. In fact, Nike specifically pointed out that this shoe is a reversion to a similar last as the Pegasus 36. Essentially, they admitted they f*cked up the last on the 37 (my words, not theirs).

I especially like the webbed lacing system they got going on with this one. Imagine a ‘W’ pattern formed with the lacing loops, creating a more dialed-in fit when everything is working together.

THOMAS: This one isn’t rocket science. Robbe covered the issues with the 37 and how the 38 fixes those issues. The new fit lets the React midsole shine. I’d say the Pegasus 38 lands right in my sweet spot for cushioning. It’s a treat for the feet, but manages to not suck the responsiveness out of the shoe. The Zoom Air unit under the pad of your forefoot adds cushioning, pop, and sensory feedback. You can feel the unit during the toe-off phase in a good way. While the outsole stays the same, the better fitting upper adds to the way the traction feels. Overall your foot is more secure.

Post-run (including a double-digit one), my legs felt fresh, and the day after I still had energy. To me, that’s a sign that the cushioning is doing its job. This is a solid daily trainer. ROBBE: I really don’t have much to say here. The shoe feels a bit heavy in hand, but it’s actually the exact same weight as the Nike React Infinity. It falls in the very normal range for a daily trainer.

It’s only gotten up to 75 degrees here in Baltimore, but there’s definitely more to this year’s upper and I can see it getting a little warm once the humidity and high heat of summer kicks in. Then again, what daily trainer doesn’t get warm in those temps. That said, this upper will definitely be warmer than last year’s, if only because of the thick tongue.

Speaking of tongue, there’s a lot of it. Where last year’s version was almost too short, this year’s version is adidas-samba-like long. And quite plush. I personally didn’t have any issues with it, but it’s visually weird, much like my face.

THOMAS: With regards to fit and ride, I am very satisfied with the Pegasus 38. Cosmetically, I didn’t love the styling of the model I received. That’s a minor thing. A more open mesh (especially in the forefoot) would be something to consider. ROBBE: Is this the best daily trainer out there? I don’t know, but it’s a good one. I like that this shoe will just work for anyone, from a beginner runner to a long-haul trucker in the throes of marathon training. Hell, I wore the Peg 33 for my first marathon and all its training and I never had any regrets. I’d still recommend this to anyone just starting out running who doesn’t want to think about a shoe. Simply put, it works.

THOMAS: I really like the Pegasus 38, it can handle a lot of your training needs. Maybe all of them, depending on your goals. It’s well-cushioned enough for long slow miles and has enough life in the midsole to do certain speedwork. At $120 it is a pretty good deal.

You might be wondering where the Peg 38 fits into the Nike lineup. It is most comparable to the React Infinity 2. The Infinity 2 has a wider rockered base of React and is more stable; however, it lacks a Zoom Air unit. Since I don’t need much stability, the Zoom Air tips the scale for me. Now that the upper fixes the heel lift issue, the Pegasus 38 has to be my choice for a Nike daily trainer.

(Final addendum: Nike, we still have animosity towards you for canceling the Pegasus Turbo line. #bringbackturbo)

Nike members can pick up the Nike Air Zoom Pegasus 38 for $120 on 4/22, everyone else can grab a pair on 4/29. Also, support your local running site by ordering off Running Warehouse (featuring free 2-day shipping and 90-day returns) by using the shop link below.