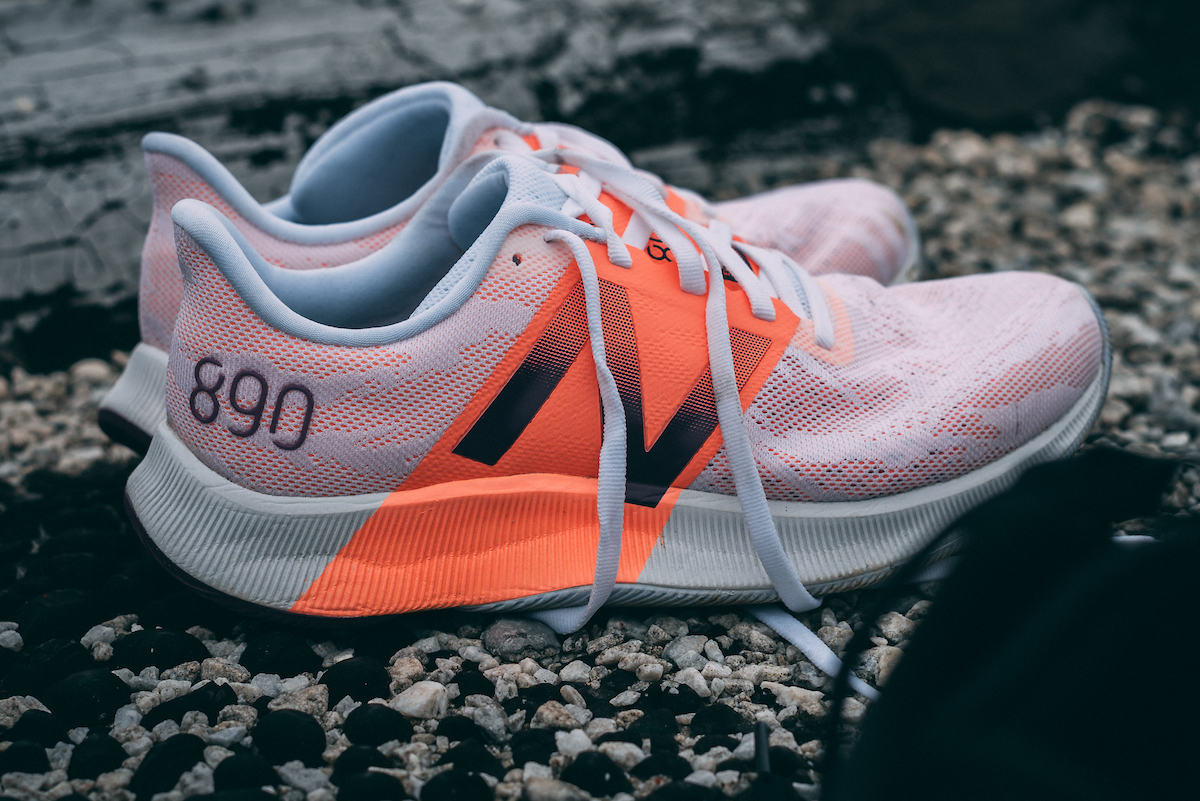 JARRETT: The New Balance 890v8 might be the 2020 leading contender for the most drastic update. Without the giant 890 numbering, you’d probably think it was a brand new shoe.

To be completely honest, it looks like the daily trainer version of the FuelCell Rebel. The question is, does it act the same?

ERIN: You know what I love? When a shoe company takes a really great shoe, ruins it, and then restores it back to its former glory and then some. Actually what I really love is when they don’t ruin the shoe to begin with but I’ll take what I can get.

THOMAS: The 890 has been so schizophrenic over the course of its iterations I forgot where the shoe originated. The 890v4 was a favorite (Erin’s least favorite, which is funny when you read the rest of this review), but geared more towards a daily trainer than an uptempo shoe. The last two versions of the 890 have become very firm, almost harsh. Jarrett mentions “it looks like a daily trainer version of the FuelCell Rebel” above, I’d be more blunt and say it feels like the big box store or budget version of the Rebel. Like H&M, the style is there– but is the quality?

MEAGHAN: The 890 is a surprise every year. It almost never looks anything like the previous model. Once again, we’ve got a complete overhaul with the 890V8. JARRETT: There’s nothing too special about the engineered mesh upper. Along with the gusseted tongue and lightly padded heel collar, it did a good job keeping my foot locked down and in place. Even with the 2E width, the N overlay felt tight at first, but loosened up after a few runs. The upper is breathable and simply works.

Is the 890v8 the Sour Patch Kids of shoes (or is this just a reference in hopes of a candy sponsorship)? First it’s sour: At first the shoe feels hard and is concerning. But then it’s sweet: something changes as you start to speed up. The firm FuelCell midsole works so much better at a faster pace. My stride felt better and more natural. I do notice it’s more responsive and does have a little pop too.

Don’t worry about taking corners too fast. The REVlite ground contact outsole and strategically placed rubber provides more than enough traction as well as durability. Between the firm midsole and rubber outsole, a good amount of stability is present for a neutral shoe.

Since everyone knows shoe aesthetics are incredibly important, I’ll go ahead and say I think the 890v8 looks pretty pretty good. I’ve heard comments that it looks cheap, but I disagree. I will say that with the camo pattern present, dark green could have been a real hot colorway. It’s not too late, New Balance.

ERIN: I’ve probably mentioned my love of the OG 890s in 50% of my road shoe reviews, but a quick rundown: The first three versions were amazing. Snappy, durable, comfortable neutral trainers. Lacking a bit in the looks department, maybe, but otherwise just a fantastic shoe. Then came v4 with its stupid pod-looking midsole; a terrible shoe that caused me to write off the 890 altogether. UNTIL NOW.

This may be the first time I’ve actually experienced nostalgia while reviewing a shoe, and I hate myself for saying that as much as you do, trust me. But the 890v8 really brought me back to the original version of this shoe and reminded me why I love New Balance (I’ve since purchased the 1080v10 and the Fuel Cell TC because what I need more than anything is more shoes). It’s light (7.2 ounces), it’s fast, and– even though the midsole has been updated to FuelCell rather than Revlite– it still has a really similar feel underfoot. Firm, but not too firm, with a smooth transition and a ride that allows you to feel connected to the road in the best way. I feel like this shoe was made for me.

Did I mention that the v8 looks good? I’m digging the mostly-white mesh upper; this is a far cry from the somewhat orthopedic-looking 890 of 2014.

THOMAS: FuelCell is mysterious. In the Rebel, the FuelCell is softer and feels more bouncy. In the 890v8, it is firm and has energy return with a fast feeling turnover, but doesn’t have a bounce. As since it’s not as squishy as the Rebel, the 890 is inherently more stable.

The upper fits well and has a gusseted tongue, so if you have read any of my reviews you know I love a gusseted tongue almost as much as Jarrett loves candy. I’m honestly shocked he hasn’t weaseled his way into a Fun Dip sponsorship.

Anyway, the whole shoe feels cohesive. Many trainers we have reviewed feel like two separate parts, an upper and a midsole/outsole. Good designs blend the two parts together and the shoe feels right through the stride. The 890v8 achieves this. The previous 890v7 looked sleek and race day inspired, but the collar and heel counter are much improved in the v8.

MEAGHAN: I absolutely love the look of this shoe. And the fit is amazing. The toebox feels super wide and there is plenty of room for my toes to spread out. The upper is a simple engineered mesh with a giant racing stripe overlay across the flat lacing system, which really locks down the foot. The FuelCell midsole, partnered with the Ground Contact REVlite outsole, is light and firm. Since there is minimal rubber coverage, these shoes are light. My W7.5 came in at 6.85 oz. JARRETT: New Balance’s website states the 890v8 is for longer miles. Personally, I disagree. I did a 12 mile run with my wife at a more casual pace. Towards the end, my feet were killing me. It turns out I may have bruised the bottom of my left foot from pounding the pavement. The firm FuelCell midsole present isn’t ideal for going the distance. Just when I thought my legs were recovering from shin splints, I found another way to hurt myself… cool beans.

Also, while the v8 is still on the lighter side for a shoe, gaining 1.5 oz. from the v7 is a little rough.

Lastly, I’m not a huge fan of the asymmetrical tongue as it’s a little awkward to hold on to. The saving grace is that it’s gusseted, so it’s going to stay in place.

ERIN: The only issue I have with these is the tongue/tightness of the upper. It creates pressure on the top of my foot, which is annoying; it took several runs for me to figure out the amount of lacing tension I needed in order to make it through a run without adjusting multiple times.

Actually, one more thing; I noticed that the exposed outsole in the midfoot area had a significantly shredded appearance with only 10 or so miles on them; since then, it looks similar (about 60 miles in) and the feel is the same, but I found it interesting.

THOMAS: The firmer Fuelcell feels less luxurious underfoot and the upper’s mesh feels rough to the touch on the outside of the shoe. The inner booty feels pretty good. The 890v8 looks better than it feels.

MEAGHAN: This shoe is firm. Too firm. My feet were not happy with me after back to back runs in them. In fact, I stopped running any distance over 6 miles in the 890’s because they left me feeling beat up. The shoe just lacks a level of “comfort” that I want. JARRETT: The 890v8 is an interesting shoe. I’ve been trying to figure out how it fits in with the Fresh Foam Tempo. I think the v8 is firmer and better for short fast workouts whereas the Tempo feels slightly softer and I was able to use it for casual 4-5 milers. If the Tempo’s toe box wasn’t as sloppy, I’m not sure which I would like better.

Compared to the Rebel, the 890v8 is much firmer, more stable, and has a more traditional upper. Both have the lateral midsole flare. If you can handle the instability, go with the Rebel as it won’t beat your feet up as bad. Also, the bootie fit of the Rebel in wide is much much better than the 890v8 engineered mesh.

Although I don’t think the 890v8 makes a good choice as a daily trainer, it’s a solid lightweight wide shoe choice for tempo runs or even a decent race day option for 10 miles or less.

ERIN: Since everyone else gave a thumbs-down to this shoe, I only have one thing left to say– GIVE ME ALL YOUR 890s!

THOMAS: The harsher feel of the firm Fuelcell leads me to recommend the 890v8 for uptempo runs and mid-distance racing. I give the 890v8 high style points, but have a difficult time finding a place for this shoe in my rotation. It falls in the category of ASICS EVOride and the Saucony Kinvara, two shoes I would choose over the 890v8. Since I wasn’t a big fan of the New Balance Tempo or the 890v8, the faster, lighter, well cushioned daily trainer is missing from the current NB lineup.

MEAGHAN: The New Balance 890V8 did not work for me as a running shoe. However, I am obsessed with it for walking around. Pretty much every grocery trip/park visit/neighborhood walk has been done in these beauties. And if you prefer a really firm ride, the New Balance 890V8 is a good option.

You can pick up the New Balance 890V8 for $120 at Running Warehouse (featuring free 2-day shipping and 90-day returns) by using the shop link below.