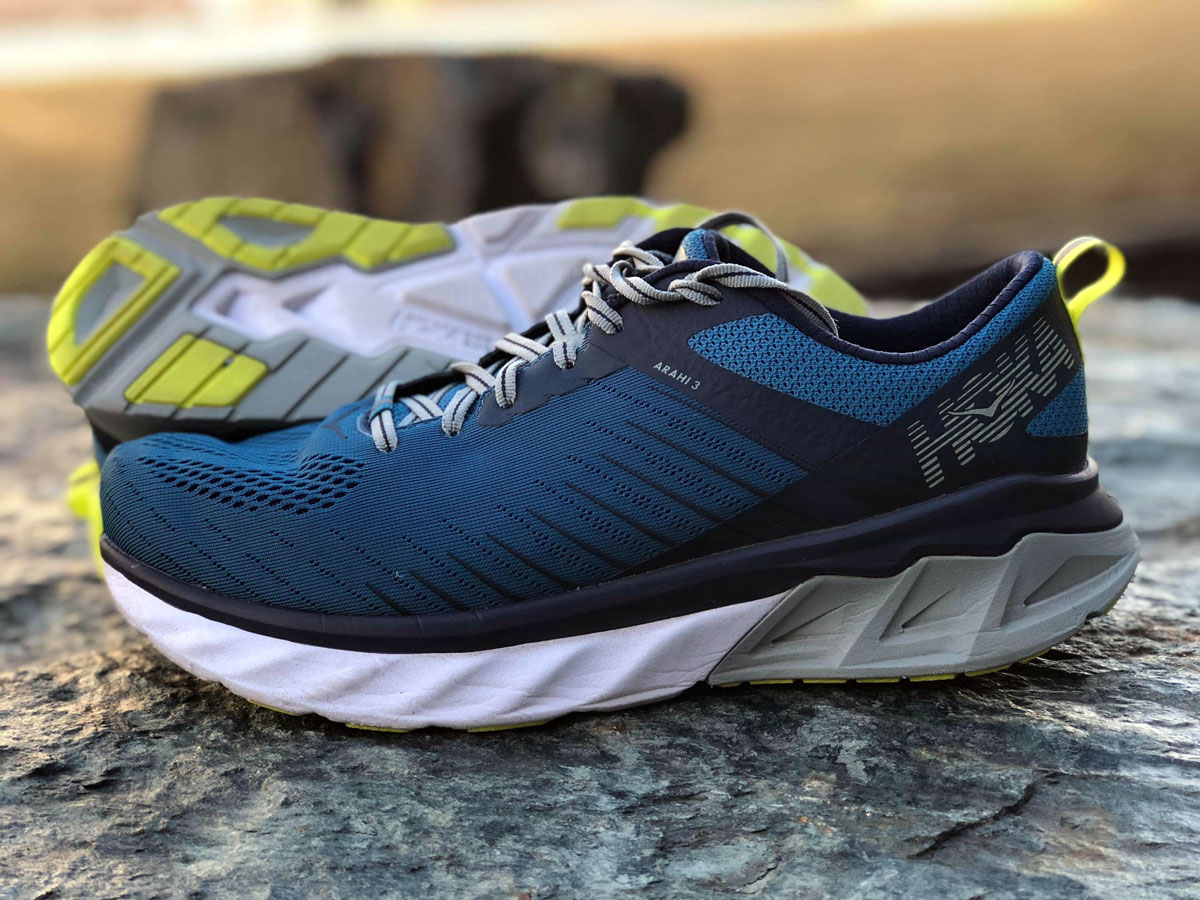 Jarrett: HOKA One One only has two stability shoes in their lineup, the Arahi and the Gaviota, so there will be some comparisons. We have already reviewed the Gaviota 2. The Arahi is for someone who wants a lower level of stability and a firmer ride. New to Arahi’s third generation is an all-new lightweight engineered mesh upper and an improved midsole.

Before I go further, I’m going to say I exchanged my Arahi 3 in size 10.5 2E for a 10 2E. I can’t speak for the regular width, but mine were nowhere close to being true to size. I felt like I was wearing clown shoes. The 10 fit much better and still had some extra room.

Austin: I actually haven’t run in a HOKA shoe for years, due in large part to the hefty midsoles. While this is one of the primary reasons why runners love the HOKA family, I simply find the cushioning to be too much. Still, I’ve been excited to revisit the brand after a lengthy absence and see what’s changed from a design, fit, and ride standpoint. Austin: The Arahi 3 step-in comfort is superb. I didn’t notice any immediate irritation or odd sensations that might denote trouble later. The toe box volume is spacious and the midfoot kept my feet locked down. At 9.5 ounces in a men’s nine, the Arahi 3 is shockingly light for a stability shoe on par with the Brooks Adrenaline (for comparison, the Adrenaline weighs 11 ounces in a men’s nine). I didn’t notice any slippage in the heel, but I think I could go down half a size without issue.

From a ride standpoint, I’m surprised to say that I didn’t feel an overly sinking feeling. In fact, the Arahi 3, like the Adrenaline and other models as of late, is abandoning the traditional, blocky medial post in favor of a more creative way to keep the foot in a stable position through the gait cycle. A firmer EVA foam on the medial side from the heel to where the toes start guides the feet through initial touchdown, midstance, and toe-off. It has an elegant smoothness that doesn’t feel forced or clunky. That smoothness, by the way, is courtesy of the early stage meta-rocker.

Jarrett: I really like how the shoe felt. I noticed a lot of cushion, but they are definitely firmer than the Gaviota 2’s marshmallow feel. In my opinion, this is what a cushioned shoe should feel like. I don’t want it to feel like my foot is sinking quicksand style. The Arahi 3 are also more responsive than the Gaviota 2.

Initially, I questioned how I felt about these shoes on hills, but after taking them on my trip to San Francisco (which apparently is uphill in every direction), my knees really appreciated them. The Arahi 3 uses a firmer EVA J-frame in the midsole to guide your foot while providing lightweight support, which explains why they feel much different than the Gaviota. My runs ranging from just a few miles all the way up to 20 all felt very natural.

The Arahi 3 are also meant to be a faster shoe than the Gaviota 2 (but that’s really not saying much). HOKA incorporated an early stage Meta-Rocker which creates a smoother ride and faster transition to the forefoot. I’m not going to lie and act like I noticed this and felt this huge difference between the early stage on this shoe and Gaviota’s late-stage Meta-Rocker, I just know that during my runs I was able to speed up or slow down with relative ease.

The spec sheet says the Arahi 3 weighs 9.6 ounces; my size 10 2E weighs a half ounce over that. I’m pretty dang happy with the weight considering it’s a wide stability shoe with cushion. I also think the price tag of $130 is much better than $150 for the Gaviota.

The shoe comes in four color options (wide sizes have two). I received the Blue Sapphire version which was a nice color. Much better than the other wide option of boring grey. Jarrett: If you can recall probably 3 minutes ago, I mentioned the sizing of my wide shoes. HOKA says these are true to size. Either I got a dud of a pair, or someone messed up bad. I’ve never had a pair of shoes seem so off on the size. Be prepared to go down half a size or accept having enough extra toe room to store your valuables.

I do wish the wide was just a bit wider. Clearly, it wasn’t a huge deal since I did a 20-mile run in them, but it would have been a bit more comfortable. I also felt like my foot was running a little hot. Nothing terrible, but I did notice it.

Lastly, I’m hesitant about the outsole. It consists of zonal rubber placement for durability. I noticed after my long run that some parts of the unprotected outsole looked a little beaten up. However, the zonal rubber looked fine. I can’t tell what this means for durability after 200+ miles though.

Austin: This is a minor critique, but Jarrett pointed this out in his review of the HOKA Gaviota 2: the laces are long. Quite long, actually. What’s more, this certainly seems to be a trend among running shoes right now. I’m all for having a little more lace than less, but perhaps the manufacturers should attempt to set a standard length measurement that generally works across all models in their collection.

Other than shoelaces, I found the Arahi 3 tongue a little stiff. I haven’t noticed it as much in subsequent runs, but occasionally it irritates my instep. I attribute this to my unique foot characteristics, which is why other runners may not notice it at any point. The outsole is showing some minor wear already on the blown rubber, but I’m okay with this as it helps keep the total weight down. I didn’t encounter any hot spots or blisters either, which is always a plus in a new shoe. Austin: If you study the HOKA lineup closely, it’s abundantly clear that the brand is becoming more mainstream. I ran in the first Bondi, and it was an ugly shoe; the upper started separating prematurely from the midsole. Likewise, the first Clifton raised many eyebrows (whereas the Clifton 5 tends to get lost in the shuffle now among a sea of competitors vying for impressions online or in-store). HOKA is obviously no longer the niche brand it once was. That’s good news though!

Fans of the Brooks Adrenaline, ASICS Kayano, and Saucony Omni may find a new friend in the Arahi 3. The weight difference alone caught my attention. Granted, all four models fit differently, which is why trying each one on is always key. I don’t normally run in shoes as stable as the Arahi (or the Gaviota, a motion control shoe that’s not a brick), but this is one I’d reach for consistently if my feet and legs need some plush recovery—with a little bounce.

Jarrett:  For me, the Arahi 3 is so much better than the Gaviota 2. They are $20 cheaper, they feel much more responsive, and I don’t have ugly blister feet after running in them. To be honest, unless your ankles have zero strength, I really don’t know why you would choose the Gaviota 2 over these. I wouldn’t race a 5k or do a track workout in the Arahi 3. They aren’t built to be speed shoes, they are built for distance. I’m super happy that I put in the effort to exchange my original pair for a smaller size because unless something magical comes along, I may have just found my April marathon shoe!