Max cushion? Bright colors? A name that people can’t always pronounce? Must be time to dig into some HOKA running shoes. The good news is that the ONE ONE name (pronounced oh-nay oh-nay) is no more, so pronunciation just got a whole lot easier. There’s pretty much a HOKA running shoe for everyone, no matter your needs. We’ll dip into road and trail options, as well as some plated options for speed days and racing.

Of course, we can only fit so much information into our roundups before it becomes too long, so make sure to check out each of our reviews for the full deets. Don’t be afraid to reach out with questions — our families are tired of hearing us talk about shoes.

As always, we let our feet do the talking. All of our recommendations come from our reviews and experiences, and we try to stick to shoes that you can buy. If we haven’t reviewed a shoe, we’ll defer to the community and our running friends, but we have plenty of miles in all of the shoes on this list.

Note: This list does not include shoes we’re currently testing (i.e. the Mach Supersonic, Tecton X, and Carbon X 3), but you can expect some of those to show up on here in early 2022. There’s only one place to start for HOKA running shoes — the Clifton! It’s hard to believe we’re already on the HOKA Clifton 8, but it might be harder to believe that HOKA has steadily improved the shoe for three years running. While we weren’t as blown away by the overall changes, this is still the best way to dip your toe into the HCU (HOKA Cinematic Universe). The Clifton remains one of Meaghan’s all-time favorite daily trainers, and we trust her, she’s run in all eight versions.

What keeps us reaching for the Clifton year in and year out is that it blends weight and stack to perfection. A US M9 comes in at 8.8 oz. while the US W7.5 is a little lighter at 7.6 oz. HOKA crafted a 15% lighter EVA foam for 2021, yet somehow the Clifton 8 gained a few grams over the Clifton 7.

Oh, and did we mention that it’s a daily-training bargain at just $130? Not gonna lie — we’ve had our issues with the Rincon in the past. It’s had durability issues where the foam would roll over and die at 150 miles. Luckily, HOKA seems to have found a bit of a remedy in the Rincon 3. We even made a rare update video once we hit the 150-mile mark to see how things were holding up. So far, so good, we’d have to say, and the Rincon 3 colorways are even better this year. Seriously, the Blazing Orange Fiesta we reviewed is off-the-wall fantastic.

Like the Clifton 8, the Rincon 3 offers a revamped EVA foam with a slight 4mm drop. However, this shoe is light as a freakin’ feather at 7.4 oz. for a US M9 (6.2 oz. for a US W7.5) — over an ounce lighter than its daily training counterpart. We could have used a little extra weight if it meant a more structured upper, but we can’t always get it all. HOKA’s slimmed-down pull tab is a little silly at this point, I think we’ve seen dental floss that’s thicker. You remember that Disturbed song, right? Ya know, Down with the Thiccness? Oops, Robbe has informed me that the song is Down with the Sickness, but the point still stands. If you want a fat stack of foam for your easy days and recovery days, this is the HOKA running shoe for you. They don’t come much thicker than the Bondi 7, but that’s not always a bad thing. The 33mm stack height is enough to give you a few extra inches the next time you head to the DMV for a new driver’s license if you need it.

HOKA hasn’t changed the midsole or outsole from the Bondi 6, but the upper improvements make all the difference. The new engineered mesh upper is a little more breathable, which should keep your toes cooler once we get through the winter months. There’s a memory foam collar, too, and we’re pretty much in love with the way it dials in the fit. Overall, the Bondi 7 has become a reliable recovery option in Thomas’s and Meaghan’s opinions, at least when they’re not rocking Deckers X Lab kicks. 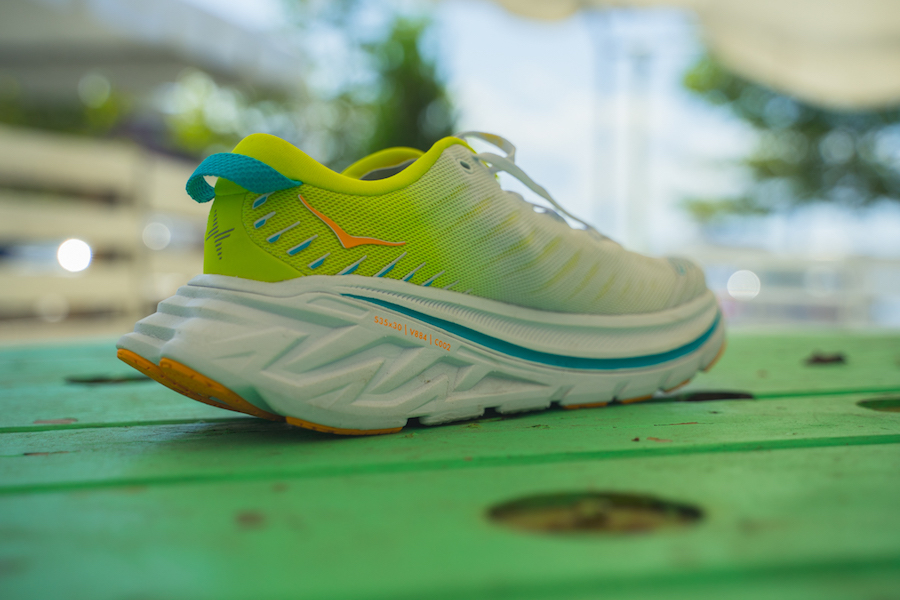 HOKA has always been the king of thiccness. Now, it wants to add speed to that stack with a carbon fiber plate in the Bondi X. Maximum cushion with some extra energy return? Sign us up. In fact, the Bondi X came in as our honorable mention for the plated daily trainer of 2021. Yes, maybe Robbe forced us to create the category for a different shoe, but we’re giving props where they’re due. Of course, the extra carbon fiber plate does come with some excess weight for the Bondi X — you’re looking at 10.6 oz. for a US M9 or 9.2 oz. for a US W7.5.

The Bondi X was an interesting one for our reviewers, too. Meaghan is into almost all things HOKA, and she absolutely loved this shoe, easily putting in over 200 miles it. Thomas had mixed feelings but overall enjoyed it, while Robbe’s first experience with the max cushion beast was fairly enjoyable. The overall stack isn’t much different from the Bondi 7, even if the extra foam extends halfway up the side of your foot. If you’re into chonky dad shoes, you might have a winner, but it might be too much shoe for some. 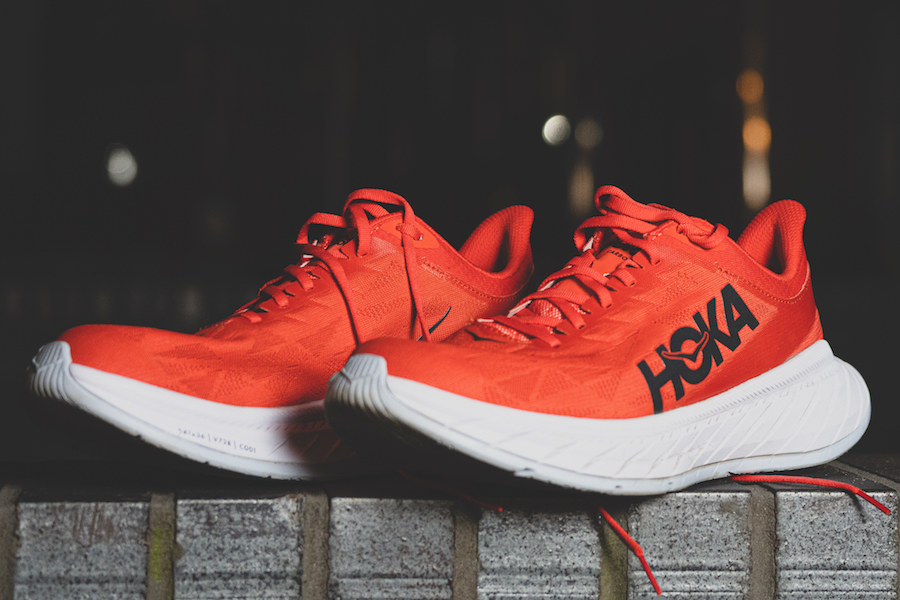 What do the Bondi X and the Carbon X 2 have in common? The letter X in their names, of course. It’s not an X-Men tie-in, but rather it indicates the use of a carbon fiber plate in the midsole. While they both pack plates, the uses are pretty much opposites. The Carbon X 2 is a top-tier speed and race day option for HOKA instead of the Bondi recovery beast. It’s the perfect example of HOKA fixing a running shoe from the first generation to the second — and it certainly made our reviewers smile.

The weight isn’t much to write home about at 9 oz. for a US M10.5, but HOKA moved the plate itself lower in the slab of foam for a softer overall feel. HOKA made it even softer, going from 65/35 soft to hard foam to more like 80/20. The revamped upper is light and breathable, too, and the tessellating triangle pattern is pretty slick when you notice it. We’ve said it before, but HOKA’s design team deserves a damn raise. Just look at the colorway they sent us, and then hit the button below to see even more bangin’ options. We’ve given the HOKA road running shoes a lot of love so far, but it’s time for a quick trip to the trails. With the Zinal, we really do mean quick — it’s lightweight, low-stack, and ready to fly. The Vibram Litebase outsole adds enough grip that you can pound through terrain without slip-sliding around. Taylor and Robbe got to put the Zinal through its paces, but not before Taylor could share the fact that the shoe is named for a Swiss village that hosts an insane trail race each year.

By the time Taylor finished his fun fact, someone had stolen Robbe’s pair (along with some other trail shoes). However, all of our reviewers enjoyed HOKA’s Profly midsole, the same one you’ll find on the Mach 4. As far as the trail-chewing lugs go, the Zinal is packing 4mm teeth which are noticeably smaller than some other trail options.

If you’re waiting around for a new HOKA trail running shoe, keep an eye on the Tecton X, which is a Zinal with dual carbon fiber plates. We just mentioned it in the Zinal section, but the HOKA Mach 4 blew us away early in 2021. Whether it’s because the shoe is actually great or just because it’s a solid jump over the Mach 3, we can’t say. Either way, it comes in with 29mm of heel stack, the same as you get with the Clifton 8. The real difference is that HOKA added its Profly midsole to the match, which is light and soft with just enough rocker. You should be able to put plenty of miles on the Mach 4 thanks to the rubberized EVA outsole — we’re talking somewhere around 400 or more.

We can’t say enough nice things about the HOKA design team as of late, and the Mach 4 is one of the running shoes that tipped us off. It has a few of the design cues that we loved from the Carbon X 2 and some exciting additions from the Clifton Edge. As for the weight, Meaghan’s US W7.5 came in right at 7 oz, which is pretty impressive. HOKA is pretty good about launching annual updates across the board, but we’re back to the trails for the oldest option on our list. The Speedgoat 4 is kinda like the trail opposite of the Zinal, with way more stack, a bit more structure, and much deeper lugs. We’re talkin’ 10.8 oz. for a US M9 and 9.2 oz. for a US W8. There aren’t too many changes overall from the Speedgoat 3, but the wider toebox is a welcome addition for trail living.

Matt and Erin had their chance to put the miles in way back in 2019, to generally good results. The Speedgoat 4 drains a little quicker than its predecessor, and Vibram MegaGrip is basically like having claws across your foot. That said, the upper is a little more restrictive, most likely for improved durability, but it takes a hit for breathability and comfort. The last HOKA running shoe on our list is something a little bit different — a lifestyle crossover. Don’t worry, it’s still a surprisingly viable running option, but you can rock the Hupana Flow on gym days and around town, too. If you’ve ever had second thoughts about wearing your HOKAs in public, whether for the colors or the thick stack, the Hupana Flow is pretty much the antithesis. It’s understated, the stack is pretty low, but it’s still lightweight and very comfortable.

Robbe praised the slight meta-rocker design, and he was surprised by how well the shoe performs when you pick up the pace. The knit upper is comfortable, and it’s easy to switch up your laces for a better lockdown. HOKA went light on the outsole rubber, too, so you may want to tread with caution for the life of your foam.

Like any older shoe, the Hupana Flow is tricky to track down these days, but we have you covered. HOKA’s Kawana looks like an updated replacement for that crossover life.