The Three Stripes has been showing up on shoes since 1949, so Adidas knows a thing or two about footwear. It knows a little bit about rivalries, too — the founders of Adidas and Puma were brothers, fun fact. We’re not really here to talk about the Dassler brothers’ rivalry, but we’re definitely here to play favorites. We’ve grabbed a few of the best Adidas running shoes to share with you from roads to trails and even for race day.

And no, there are no damn Yeezys on this list. Don’t run in them. Just don’t.

Our picks always come from our own experiences here at Believe in the Run. After all, we get a lot of shoes in for testing, and we like to let our feet do the talking. While we don’t always love every shoe that arrives, it doesn’t mean that you won’t. We try to weigh thoughts from our running friends and the community in general. All of our picks should be available for you to buy right now, too. While some adidas running shoes fell flat for us in 2021, there was one that not only bounced, but bounced in all the right ways straight to the top of our favorite shoes of the year– the Takumi Sen 8. When the dust settled, it sat in rare air among the Nike Alphafly and New Balance Rebel V2. You could think of it as a shorter-distance sibling to the Adios Pro 2 with Lightstrike Pro foam and energyRODS to give you a touch of pop. It offers a lower stack than the other Adidas performance options, with 33mm of cushion in the heel and 27mm in the front.

We can’t say exactly how Thomas knew he’d love the Takumi Sen 8, but he took it right out of the box for his recent half Iron Man in Orlando. If that’s not confidence, I don’t know what is. The upper is comparable to a soccer/football cleat in that it’s secure throughout for a locked-in racing feeling, though it does require a bit of adjustment to dial in the lacing. But once you’re locked in, you’re really locked in. The upper is also crafted from Adidas’ Celermesh material, with a tongue that’s not quite gusseted, but not quite loose, either.

Slap on a secure Continental outsole and a forgiving ride that stays soft and bouncy for mile after mile, and you have a shoe that will take you any distance you need to go. So even though Adidas pegs the Takumi Sen 8 as a 5K to half marathon shoe, we’d wager you could push a full marathon in ’em too. 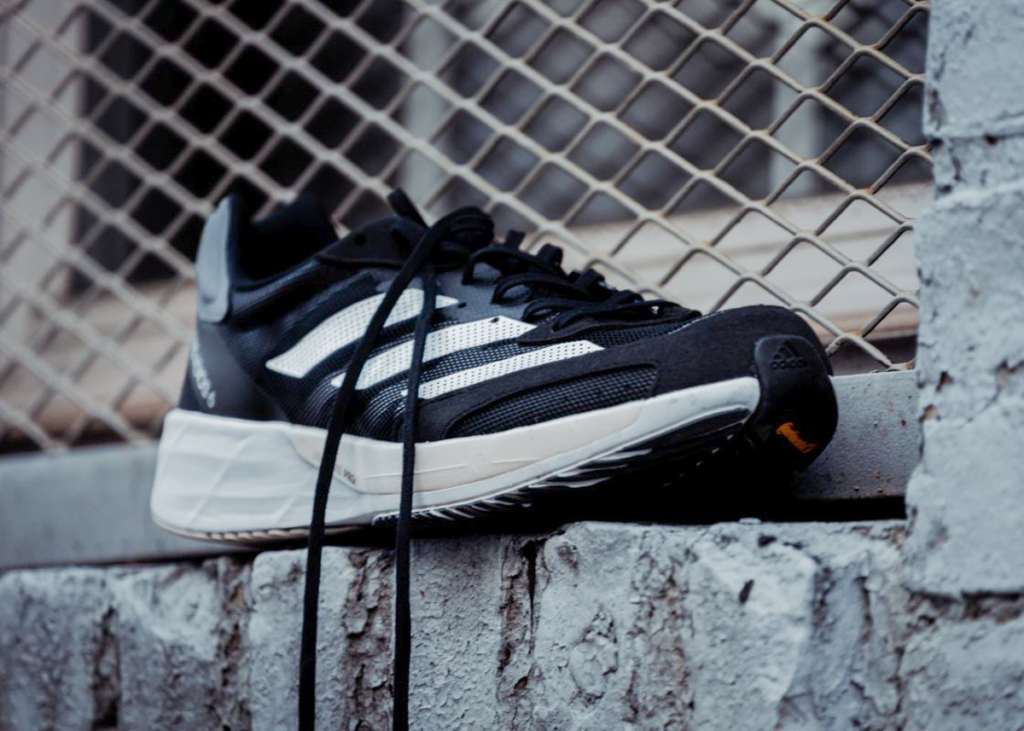 The Adidas Adios used to be the premier racing option from the Three Stripes, at least until the AdiZero trio arrived. We just recently got our hands on a few pairs, and you can check out a few of our first thoughts right here. The Adios 6 takes on a mix of Lightstrike and Lightstrike Pro foams for a slightly firmer overall ride, and it’s more of a traditional racer, but could be used as a lightweight daily trainer in a pinch. It weighs just 9 oz. for a US M10.5, and Thomas pushed it through a few ten-milers for his Winter GRIT miles.

The Adios 6 tends to run narrow, so you may want to try it on before committing. We’d probably recommend it over other daily training options like the Boston 10, which we weren’t in love with this time around. Really, if you want an all-around Adidas running shoe, this is probably your best bet. And at $120, it’s a damn good deal. You ready to get risque? We’re about to get into barely legal territory with the stack on the Adidas Adios Pro 2. It’s as thick as you can get with 39mm of Lightstrike Pro cushion in the heel — just one measly millimeter away from the World Athletics limit. Beyond the fat stacks, the Adios Pro 2 incorporates the same energyRODS setup as its Takumi Son (see what we did there?). You get a similar Celermesh 2.0 upper, which is see-through and brings plenty of recycled goodness into the mix.

Robbe, Thomas, and Meaghan had plenty of praise for the overall Lightstrike Pro experience, which feels an awful lot like ASICS’ Flytefoam Blast Turbo. However, the Adios Pro 2 seems to falter regarding stability. We’re not sure if it’s the stack height or the width of the platform and its cutaway midsection, but the shoe got a little sloppy whenever our form faltered. The lacing might be a little tricky for some runners, too, so make sure you have time to adjust before your big race.

Honestly, if you can find the Adios Pro 1, we preferred that shoe. But people are breaking records in this one, so what do we know? We love to play favorites here at Believe in the Run, and the Terrex Speed Ultra offers heaps of bang for your buck on the trails. It was Taylor’s first Terrex experience, and it flipped everything he’d heard about Adidas on its head. The lightweight design and impressive midsole combo feel great on trails, though it’s stacked more like a racing flat than a max-cushion behemoth. Adidas added Lightstrike (not Pro) to the length of the midsole with a wedge of Boost in the heel for a little extra comfort.

Taylor and Matt both praised the shoe’s fit and pulled special attention to the Continental outsole. It only packs 3mm lugs, yet the grip is sticky as a melted Laffy Taffy on a hot summer day. Both reviewers felt that the shoe stayed true and steady over various terrain with very little to complain about. Robbe found this to be his favorite trail shoe of 2021 that wasn’t the Speedland SL:PDX. Remember when we said that not all Adidas running shoes are hits in our eyes? This is a perfect example. We didn’t honestly love the Prime X because it might just be a little too much for us. That said, it might work much better for you, provided you’re not heading for any World Athletics events in the near future. Adidas packed an unreal 50mm of Lightstrike Pro stack in the heel with a familiar overall formula. If you’re not familiar, that’s 10mm over any legal racing limits. That said, you’re probably not a pro runner, so you’re also probably okay if you really want to race in this shoe.

If we’re talking Goldilocks and the Three Bears, the Prime X is Papa Bear. The Adios Pro 2 is probably Mama Bear and the Takumi Sen 8 is Baby Bear. There’s so much foam, the energyRODS are back, and the Celermesh upper is as breathable as ever. Plenty of runners enjoyed their time in this beast, though the universal warning is to be careful as you pound around corners. Or just be careful on sidewalks. Or if your form isn’t spectacular. If you’re just after a way to boost the height on your driver’s license or see over a crowd at a concert, this is probably it. Our Adidas Adistar review is hot off the presses, and honestly, that’s just how we like it. The shoe is a perfect example of our relationship with Adidas — it looks beautiful, but the experience doesn’t always add up. It’s not the lightest daily trainer, yet Thomas praised the overall running experience. He did point out that it’s best saved for those single-speed days where you’re just out to get the miles in. If you have some striders or intervals to look forward to, you may want to shift your attention elsewhere.

Adidas packed a fat stack of foam into its latest running shoe, with a one-two punch of Repetitor and Repetitor+. The difference is that Repetitor is soft while Repetitor+ feels like a brick underfoot. It’s meant to add stability, and it works well in this case. You’ll find a 6mm drop on the Adistar with a whopping 37.5mm of cushion in the heel.

Almost all of the outsoles in the Adidas portfolio are crafted from Continental rubber. It’s tough and offers plenty of grip, but forgive us if we don’t mention it on every single shoe.