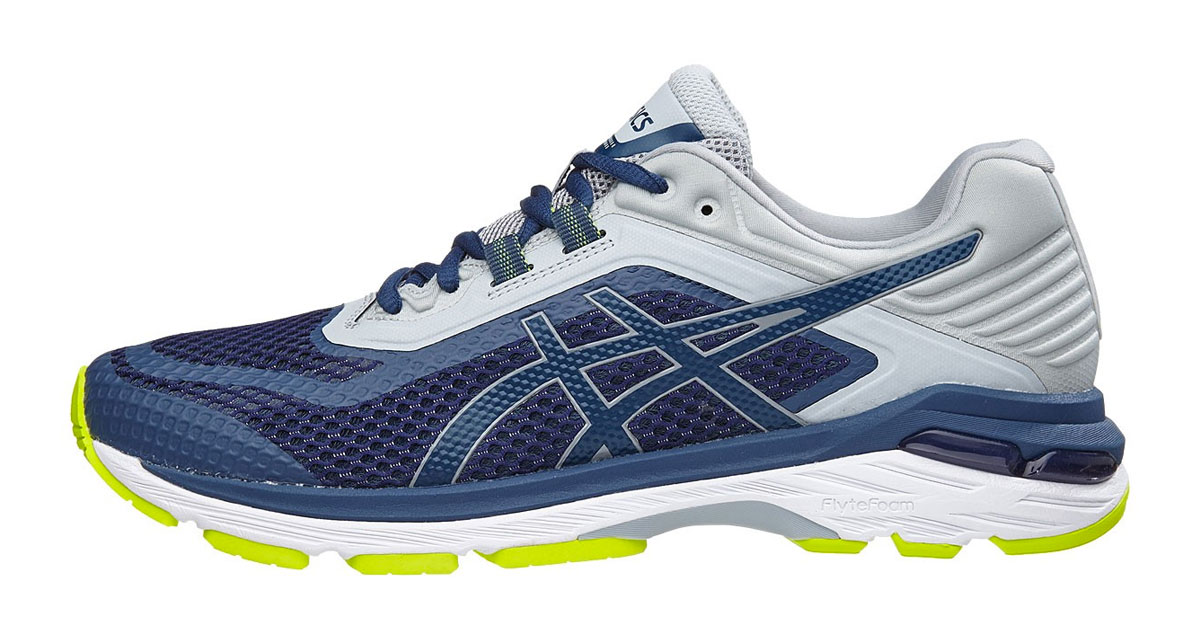 Erin: Welcome to Part 2 of a two-part series where I review some Asics. This is a review of the GT-2000 6, one of Asics’ stability trainers. Now, let me preface my review by saying that I don’t have any overpronation issues (that I’m aware of), so I’m not going to choose to run in a stability shoe, mostly because they tend to be a lot heavier than I’d prefer. It’s hard to run fast wearing shoes that feel like bricks, etc.

If you’ve read Part 1 of this series, you might recall that I think the Asics GEL-Nimbus 20 may well be the ugliest running shoe ever. It’s certainly a contender, in any case. The GT 2000 6, on the other hand, isn’t a bad-looking shoe! I received a pair in the black/pink colorway, and it’s pretty sleek-looking; kind of reminds me of the newer Brooks Launch.

The step-in feel for these is pretty good, too; I don’t have any complaints about the fit. For those who have run in previous versions of this shoe, Asics has widened the toe box, which I found sufficiently wide as someone with bunions that flare up from time to time. The lacing system consists of standard holes, except for the second and third lacing points, which have loops that allow for a more controlled/tighter fit through the midfoot. The heel fit is snug as well, for those who have issues with heel slipping, without an over-padded heel collar.

Like the GEL-Nimbus 20, the GT 2000 6 has been upgraded to Asics’ new FlyteFoam midsole. According to Asics’ technology team, FlyteFoam spent three years in development, with 300 original prototypes developed; the result is their “lightest, most responsive cushioning ever.” At over 50% lighter than traditional EVA, FlyteFoam reduces the weight of the GT-2000 6 by 0.7 oz over V5, with V6 weighing in at 8.2 oz. Not too bad for a stability shoe.

Austin: The first change of note is the substitution of FluidRide (a twin-layer structure comprised of Solyte & SpEVA) with FlyteFoam, a midsole that’s 55% lighter than the industry standard (according to Asics). The GT-2000 6 weighs 10.7 ounces in a men’s size 9, a substantial drop from the GT-2000 5 at 11.3 ounces. If no other changes were made for version six, the FlyteFoam midsole – supplemented by SpEVA – would still be a worthwhile revision. But there’s more to this beloved trainer.

Other well-known Asics technologies are retained in the GT-2000 6, including rearfoot and forefoot gel, the Impact Guidance System (IGS), the Guidance Trusstic System, and Dynamic DuoMax. All four contribute to cushioning and a stable platform mile after mile. The version 6 upper is noteworthy too. An open mesh increases breathability while the seamless construction lowers the risk of irritation across the top of the feet.

How do these changes translate on the road? The word I kept returning to after each run was smooth. The GT-2000 6 has a smooth transition. Though I prefer shoes with a lower drop (the GT-2000 6 is 10 millimeters), every step felt nice. The shoe felt soft, quiet, and responsive. Like other midfoot or forefoot strikers, I find it harder to run in shoes with a higher drop, but I didn’t feel like I was fighting to accomplish this in the GT-2000. Asics incorporated two distinct eyelets near the top of the lacing configuration in version six to structure the tension and improve overall comfort. Finally, of the few Asics shoes, I’ve owned throughout the years, I’ve consistently found the toe box space lacking, this was not the case with the GT-2000 6 – it was ample, dare I say spacious. Erin: This shoe required a bit of a break in period for me. Even though it’s pretty light for a stability shoe, it’s still heavier than what I’m used to running in, and it makes it difficult to want to run in this over something lighter. That said, for someone who is used to running in a stability shoe, the GT 2000 6 will likely feel lighter than what they’re accustomed to. Also, while Asics touts FlyteFoam as cushioned and responsive, I didn’t get that from the shoe. Maybe it’s the Trusstic support system that prevents it from feeling very responsive; I’m not sure. They do feel better now that I’ve put more miles on them, but the first few runs were a struggle. These also have a 10 mm drop, which probably affects my gait a bit.

Austin: The only critique I have for the GT-2000 6 is heel fit. Like the tendency to be narrow in the forefoot, Asics models seem to be prone to sliding on the heel. I didn’t use the extra eyelet to secure the heel more, but I felt my right foot slipping a touch during a handful of runs. The Heel Clutching System, “exoskeletal” in the GT-2000 5, has been modified for version 6. This change, which might be significant for some runners, may account for the slippage I observed. Erin: I think this is probably a great shoe for a runner who requires some stability but wants a little more performance out of their shoe. Aside from the fit and look of the shoe, both of which I liked, this was just…a shoe. The Delaware of running shoes, if you will. Fans of previous versions of this shoe will likely be impressed by and happy with the changes made, so I encourage you to try them out!

Austin: I’ve noticed a recent uptick in running shoe prices again. The Asics Gel Nimbus 20, which I will be reviewing soon, increased $10 to $159.99. The Asics GT 2000 series, in contrast, has remained steady at $120 for some years. As a structured, daily trainer for runners who need a touch of stability for mild to moderate overpronation, the Asics GT-2000 6 is worth a closer look. A wider toe box, FlyteFoam midsole, seamless upper, and smooth ride are the obvious hallmarks of this model that endures year after year.