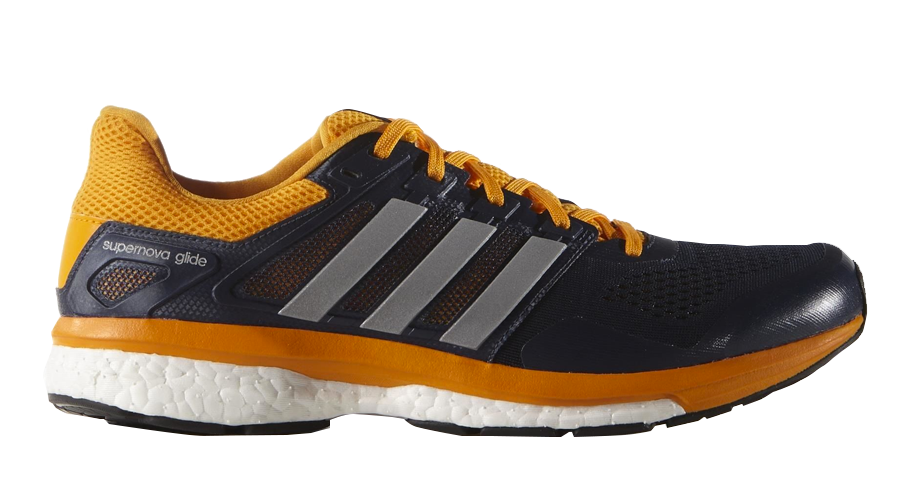 The Supernova Glide Boost has been a bright spot in my shoe rotation for the past twelve months. In fact, I have gravitated towards numerous Boost models as of late, including the Energy Boost and the Adios Boost (for races). For longer runs I prefer the Glide Boost to the Energy Boost as it has some extra EVA (ethylene-vinyl acetate) foam to complement the TPU (thermoplastic polyurethane) Boost midsole. The Glide Boost 7 is a solid shoe, but what of the Glide 8 that recently landed on store shelves? Does it have the same glow and radiance as version 7?

As a fan of the Glide Boost 7, I’m excited to say that the Adidas Supernova Glide BOOST 8 has changed little from its predecessor. I’ll start by highlighting what I favor about this particular model by Adidas. The midsole, comprised of 55% Boost and 45% EVA, is unchanged, as is the full-length Continental outsole that provides superb traction on roads or trails.

In terms of the fit, my feet are more narrow than most, but I’ve discovered that the Glide Boost tends to accommodate more types of feet as it fits slightly wider than other models, i.e. the Energy Boost, the Boston Boost, or Adios Boost. As to the feeling underfoot, the presence of EVA, which I noted in the previous paragraph, gives the Supernova a heightened level of softness.

The absence of stitched overlays on the upper, flat laces, and ample forefoot cushioning highlight the Adidas Supernova Glide BOOST 8, and all are characteristics of the previous version. What of the changes though? After scrutinizing both models and checking for notable changes, I see two differences of note. The heel tab is a little higher, and this change makes the Glide 8 appear similar to the Ultra Boost in this regard. The second change concerns the tongue – it’s slimmer and softer. Whether you notice this hinges on if you like the fit of the Glide Boost 8, so try this model on to see if it feels comfortable on your feet.

The Glide Boost 8 is a tenth of an ounce lighter than version 7 – a marginal difference that is unlikely to be noticed. Adidas has also done a fine job with color lately (at least in my perception), and at $130, the Glide Boost isn’t a budget buster for a high mileage trainer. The Energy Boost and Ultra Boost are priced at $160 and $180, respectively, but this price increase is due to more Boost midsole in the shoe construction.

Since the Glide Boost 8 is a compelling continuation of version 7, I’m excited to keep logging miles in this model that didn’t receive much in the way of change from last year. Adidas running shoes tend to be overshadowed by Brooks, Saucony, and Asics, but the Boost midsole technology has proven to be a giant step in their favor. The Glide, just one of the many models they make, is a superb supernova right now.