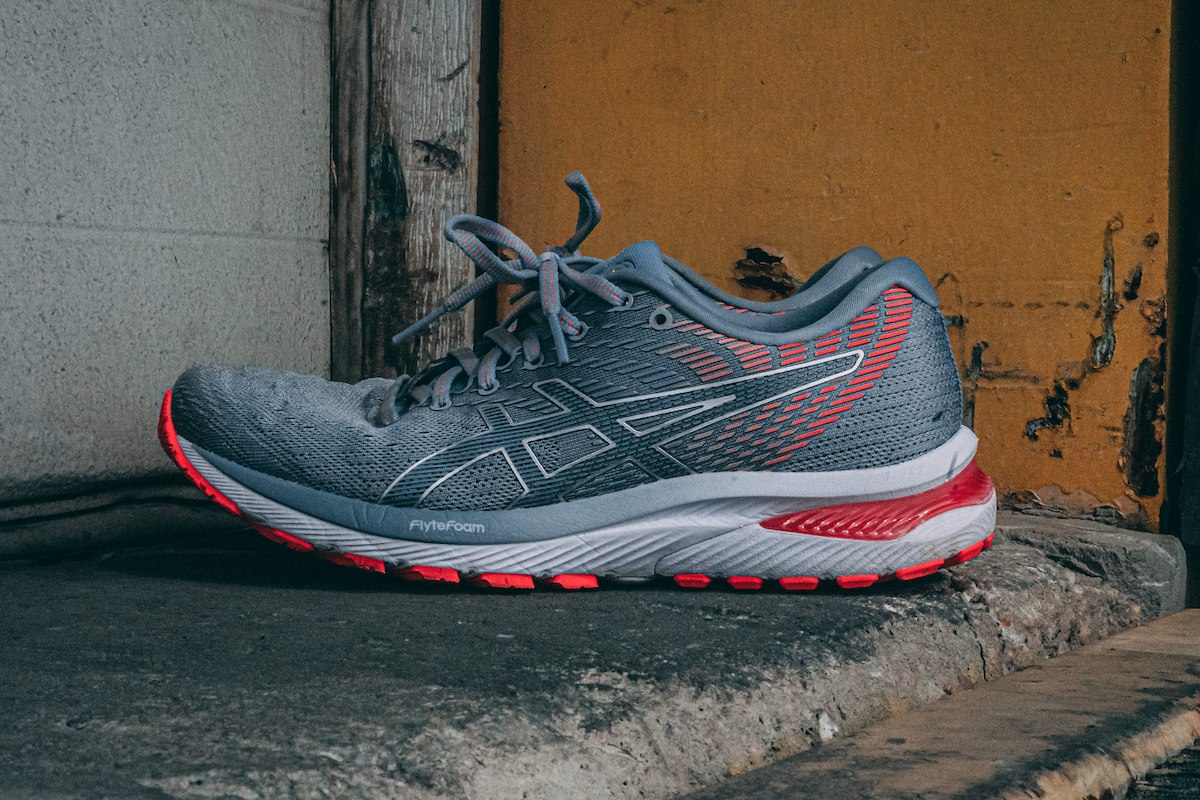 ADRIENNE: I have finally gotten the motivation to stop binging Tiger King and get back on the review train. What better shoe to cover right now than the ASICS GEL-Cumulus 22? I mean, the shoes have tiger claws on the sides of them! You don’t have to be Team Joe Exotic or Team Carole to appreciate this fully updated creation from perhaps one of the biggest comeback kids in running recently.

I’ve spent plenty of time with them as I’ve also been binge running in our current circumstances and the Cumulus 22 has been a pleasant and welcome surprise. PSA: I recommend running over trashy true crime documentaries.

ASICS wasn’t messing around when they retooled this edition from the ground up. You know that “ASICS Feel” that you either love or despise? Yeah, it’s not there in the Cumulus 22. If I was blindfolded and asked to sLip these shoes on, I would not have guessed ASICS. Overlays and an all-business ride have been replaced by lightweight mesh and flexibility and smoothness. Mind trickery, I say! ASICS fans don’t you worry, there’s still some gel in there.

Let’s get the specifics outta the way. The Cumulus 22 does feel light in hand and on the foot, and it is over an ounce lighter than the last version. The standard 10 mm drop stays the same, with stack heights of 22/12 for the gals. The Cumulus 22 still stays true to its identity as a daily trainer/long run shoe, but it rolls nicely and won’t slow you down too much if you get your legs turning over.

Speaking of weight, I’m impressed with how much rubber coverage (i.e. Asics High Abrasion Rubber or AHAR) the shoe has and still weighs in well under 8 oz. Good job there, ASICS. Deep flex grooves run the length of the forefoot and a decoupled heel makes for one of the smoothest riding ASICS I’ve ever worn. A fairly thick (but not thicc!) layer of FlyteFoam sits above. There is no bottoming out, and while nothing out of this world, I like the snappy and protective feel that this foam brings.

The Cumulus 22’s upper is a significant upgrade. And dare I say it’s attractive? I love the subtle Piedmont Gray/Steel colorway. 3D-printed Tiger stripes provide some midfoot support and have some perforation to them. The upper is also flexible and feels natural on the foot, unlike the “animal sanctuaries” on Netflix.

The increased perforation is a smart move by ASICS, as this can be a decent summer trainer. Most of my runs in them were in 85 percent humidity or better down in Texas, and they seem to breathe well for their class. I was a little concerned about the heel collar being so built up, but it turned out that it helped with heel grip– no slippage here. Is ASICS the Tiger King again? Let’s talk some more about what’s great and can use some tweaking in the Cumulus 22. ADRIENNE: I sound like a broken record on here, but this isn’t your mother’s ASICS anymore.

I loved the natural feel (for me, at least) of the transition and toe-off. The shoe just rolls with my stride and has the right amount of flex with no sloppiness or squirrliness. Its smooth ride is on-par with another highly rated trainer on here, the New Balance 880v10. While the Cumulus 22 doesn’t have the rebound of Fresh Foam X, no energy is lost on contact and the FlyteFoam has a decently energetic feel of its own.

I also appreciate the lighter weight in this version relative to the cushioning. I took these on runs ranging from 4-12 miles, and every run was comfortable– even at the end of a humid long run, my legs still felt good. You don’t take a beating from the road at all thanks to the AHAR/Flex Groove/FlyteFoam combo. The upper and midsole construction work well for an enjoyable, cushioned ride that can work for entry level runners and mileage hogs alike. And it looks pretty good too. That’s always a plus.

JARRETT: As is always the case, ASICS is on their game with the upper. The new one-piece mesh upper is more breathable than the previous version. It still has the big ASICS logo on both sides, but instead one giant solid overlay, it is now broken up into a bunch of tiny overlays for more airflow.

The tongue is still nicely padded and stays in place and the heel collar still has a ton of padding. It’s like the complete opposite of a heel like the New Balance Fresh Foam More V2 or Beacon 2. Is the heel padding overkill? Maybe, but it also keeps my heel from slipping and hugs the Achilles well.

The midsole uses a softer FLYTEFOAM to provide a softer ride. With last year’s version, the ride to me was unresponsive and too firm. This new midsole isn’t super soft and bouncy (like the New Balance 880v10), but is more of a traditional smooth ride. Don’t expect that marshmallow feel. With a lot of overly cushioned trainers, if the midsole isn’t done right, you get that sinking feeling which makes running so much harder. This cushioned yet still semi-firm and stable feel is very welcome and a big upgrade over the Cumulus 21.

Regarding the outsole, I think I finally understand the difference that these flex grooves make. The Cumulus went from a stiff clunker to a silky-smooth machine.

I also noticed that the toe lift angle on the Cumulus 22 is much more prominent than with the 21. I would have never noticed had I not taken a picture of the two versions facing each other. Another explanation of why the transition felt great and why my legs aren’t trashed post longer runs.

The new weight puts the Cumulus 22 right in the middle-of-the-pack for a daily trainer. I’ll have to get some tips from ASICS on weight loss because being forced to work from home on the couch isn’t helping anything. Seriously, I must check the fridge like 20 times a day.

AUSTIN: Hall of Fame Miami Dolphins quarterback Dan Marino likely Italian loafers behind the game day desk, but I like to think that he’s wearing the Cumulus 22 colorway I received. That’s the first thought I had after unboxing them: Miami Dolphins. The design pops, friends.

Since Adrienne outlined the characteristics of note, I’d like to devote my time to the ride. In short, it’s smooth. For the life of me, I can’t remember the midsole compound in the legendary Cumulus prior to FlyteFoam, but the change has wiped my memory for the better. The one-piece mesh upper allows the foot to breathe well, the midfoot is secure, and the padded heel collar adds comfort without slip. I stuck with easy runs but did manage to dip into 5-minute miles (for about 20 seconds). The Cumulus 22 delivered. ADRIENNE: I still sense just a bit of ASICS’ resistance to change in the Cumulus 22. Lower the drop from 10 mm to 8 mm, and I think the ride would be even smoother, and still just as protective. While not terrible, I noticed the heel height more than I would have liked to. Besides the puffy tongue (that doesn’t affect performance), this is a solid offering in the daily trainer category.

JARRETT: I’m shocked at how few issues I have with the Cumulus 22. Hmmm…

Oh yeah, there’s some of that Gel goodness people love in the heel. If it wasn’t exposed and highlighted in that beautiful clear ocean light blue, I probably wouldn’t have noticed it. I do wonder what the shoe would be like without it and if the Gel is even necessary and just adding weight. I’m kind of rambling while trying to figure out what could be improved. Clearly I’m grasping at straws.

AUSTIN: Although ASICS touts the Cumulus 22 as the lightest version ever, I still think it’s a bit heavy (10.1 ounces in a men’s nine). Also, it felt like I was fighting the bulky heel run after run. The 10 mm offset suggests that ASICS is still hesitant to lower the drop to 8 mm, and I kept landing on my heel despite my best attempts to stay on the forefoot. Runners who make initial contact with the ground on their heels are sure to love the lush combination of GEL and FlyteFoam, but I found the heel irritating and impeding. ADRIENNE: Yet another step forward for ASICS. Like its sibling in the GEL-Nimbus Lite, the Cumulus 22 bridges the gap between the old and the new for ASICS, and I find it just a little better looking than its bigger brother. Loyalists to the brand will likely be happy with this update, as those just testing the still gel-filled waters of the brand. Comfortable, decent-looking, and reasonably priced at $119.99, those who want a straightforward, comfortable daily driver should look into the Cumulus 22. The Tiger lives on!

JARRETT: I had three big issues with the Cumulus 21 (heavy, stiff, and firm) and ASICS addressed all of them. The shoe now sits as a top neutral daily trainer choice for me, even with me getting a standard width shoe, and is an early 2020 contender as the best do-it-all shoe out there.

For comparisons, the New Balance 880v10 is going to be a little bit heavier, but also softer and more bouncy. The Cumulus 22 is lighter, has that firmer more responsive feel, and the toe-off is excellent.

See, ASICS? Sometimes beautiful things blossom out of arguments. Our fight from last year was worth it and so is the Cumulus 22.

AUSTIN: As Adrienne noted, the Cumulus 22, like the Nimbus Lite, are glimmers of the direction ASICS is taking their running shoes. Lighter materials. Simple, breathable, uppers. And colorways that aren’t dull for a daily trainer built to go the distance for many miles. I’m surprised that the price didn’t increase ten bucks like some of its competitors.

You can pick up the ASICS GEL-Cumulus 22 at Running Warehouse for $120 (featuring free 2-day shipping and 90-day returns) by using the shop link below.