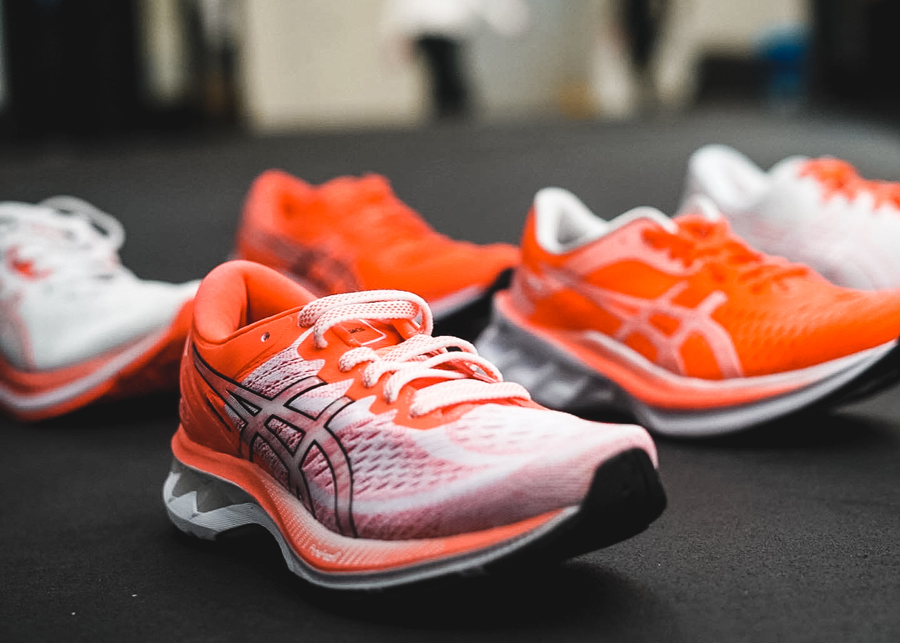 We wanted to split this up into two posts, because it was a long couple days, and this would’ve been a long post. In part one of our 2019 TRE recap, we looked at Saucony, Altra, Skechers, HOKA ONE ONE, and On. In this part, we’ll look at ASICS, Brooks, Reebok, Diadora, New Balance, and Salming.

To recap everything (and if you read this in the first post, please skip ahead), there was definitely a sustainability theme going on this year. From uppers made of recycled plastic (HOKA) to midsoles made from castor bean oil (Reebok), it seemed like everyone had some sort of environmentally-friendly pitch for their shoes.

Anyway, here’s our second round of thoughts on TRE 2019. Enjoy, and if you have any questions, ask away in the comments.

The Rebirth of ASICS

To be honest, we had little expectations for ASICS coming into the event. Aside from the Glideride, there wasn’t much we saw that was interesting from them over the last couple years. Which has always been sad, because we love the ASICS origin story and brand image, and want to see them return to greatness instead of resting on their laurels. Well, they turned around and shocked us with a bunch of new shoes coming out in 2020 and early 2021 that are fresh and bold. Right off the bat, we were attracted to the new ASICS NovaBlast, a shoe that we thought we could talk about, but apparently can’t. I literally had the whole description written up when they asked us to hold on it. We were given the OK for it originally, and you may have even seen it posted on our channels, but ASICS meant to have it on embargo so we took it down. We think it’s going to be a game-changer for ASICS going forward.

There’s also a new GEL-Nimbus Lite coming out which has a fresh look to it and weighs over an ounce less than the GEL-Nimbus 22. That comes out in February 2020, and we just got those into the office today for testing/review.

And then there are a couple other shoes that we’re not allowed to talk about or show, but we can say are pretty exciting and slated for a 2021 release. Successors to the Glideride, racing shoes, uppers that look very much not like an ASICS shoe– it’s all there and it all looks very promising. It shows that they are listening, making changes, innovating, and finally taking some risks again.

Sorry, I know that’s not a ton to go on, but we’re doing what we can to ensure we’re able to get you great shoe content in the future.

Brooks is Brooks, But With Some Pop On The Way

First things first, the Hyperion Tempo and Hyperion Elite will finally be out (well, one of them anyway) in 2020 in time for the Olympic Trials. The Tempo will feature an all-new midsole which reminds us a lot of Skechers HyperBurst in composition, while the Hyperion Elite will be the carbon-plate shoe seen on the Brooks’ elite athletes. We can’t talk about release dates/specs/prices right now, but there you go.

Nothing groundbreaking to give you for the 2020 Brooks lineup in general. The mainstay shoes will be split into two families– energizing and cushion. In the energizing bucket, we have the Levitate 4, with a new last, knit upper, rocker-like fit, and reformulated DNA Amp midsole (supposedly 20% lighter than the previous version). It’s lost over an ounce in weight as well and is now 9.2 oz. That comes out on 6/1 for $150.

One of our favorite sleeper shoes from last year, the Brooks Revel 4 is the best-looking shoe coming out next year, but will still have the classic BioMoGo midsole. That will come in at 8.9 oz. and will sell at that nice $100 price point. It’s not changing the world, but it’s a very solid entry shoe and is also one of the best-looking shoes from Brooks.

In the cushion category, the Brooks Ghost 13 will have a new engineered mesh upper and a full-length lateral DNA Loft crash pad (it used to be in the heel only). The same goes for the Adrenaline GTS 21, which will also come with a 3D overlay saddle on the upper for extra support. Weighs 9.6 oz., comes out on 8/1 for $130. A Gore-Tex version will also be available for $160.

We’re actually very excited about the Brooks outerwear offerings as well. They have a reflective jacket that actually looks sick, and a couple other items as well that runners will love for the form, function, and fashion. It’s obvious they spend a lot of time developing some of these items, and we’re excited to see them in action.

For our female followers, Brooks is also very excited about their new line of Run Bras, which they put in a ton of research and effort into developing, so keep an eye out for those. They’ve developed fits and styles to accommodate every body shape while providing comfort unlike any other bra on the market (their words). We’ll have our reviewers on them shortly to give you a full review.

Somehow we didn’t have an official meeting with New Balance, nevertheless, we’re excited for some of their 2020 offerings, namely the New Balance FuelCell Vazee Prism. The Vazee Prism was a hit in the past before it was laid to rest for a couple years. Back from the dead, it comes with new FuelCell midsole and looks to be a great shoe to follow in the steps of the 2019 FuelCell line.

We’ve seen a lot of people speculating that this shoe is the carbon shoe. It is not.

The Fresh Foam More Trail also looks awesome, but not sure how well it’ll perform on the trails. The Hierro v5 also looked incredible and works hella good as a fashion shoe, but it fell flat for us when put into action.

We also got a look at the carbon-plate race day shoe (but not in its final version). It looks pretty sweet and should be here in Fall 2020. Also, the Fresh Foam Beacon 3 will now have the same Fresh Foam X midsole that’s in New Balance’s newest shoes (like the 1080 v10).

Diadora Is Bringing Back The 90’s

Although they’ve started to dip their toes back into the U.S. running market over the past few years, Diadora is coming with a dedicated effort in 2020. First sign— they were set up right in the middle of the convention space, with a whole lot of 90’s vibes going on, like a damn grand prize pack from a Nickelodeon game show. I’m sold. Oh, also they had a bunch of shoes and gear on display.

We just got in the Mythos Blueshield Elite, so we’ll see what that’s like and have a review up shortly. One thing’s for sure, we love the 90’s outerwear lifted straight from their back catalog.

We’ll also be heading up to their North American HQ in a couple weeks, so jump over to our Instagram and YouTube where we’ll be posting live content from there.

Despite making sleeper hits with the FloatRide line, Reebok isn’t exactly pouring money into the run division. That said, what they do have is legit, and we couldn’t be more excited that they FINALLY got rid of the stupid triangle logo and brought back the old-school stripe logo.

The Forever Floatride Energy 2.0 is already out but will be the main player in 2020. Another interesting shoe from Reebok is the ultra-sustainable Floatride Reegrow, featuring a midsole made in part from castor bean oil, a eucalyptus and algae upper, and natural rubber outsole. Definitely wins the award for the most progressive shoe of 2020. It looks really cool too.

Lastly, like every other company, there were a few other shoes from Reebok that we can’t show yet, but that we are super excited about. They fall into that same category that most shoes are trending, but that’s all we can say for now.

For the most part, Topo Athletic is improving on the current lineup, which is severely underrated in the running industry as a whole. The company focuses on low-drop shoes with more room in the toe box, basically existing in that space between Altra and a typical running shoe. We absolutely loved the MTN Racer trail shoe last year, and the road shoes were solid as well. Our review of the Zephyr is coming out shortly.

For 2020, Topo Athletic will be releasing the UltraFly 3, a light guidance shoe with a 5mm drop and a half-ounce lighter than the previous version. The midsole is upgraded with Topo’s Zipfoam, with a little more TPU than EVA for a durable-yet-responsive ride. That comes out in May 2020 for $130.

Honestly, we were most excited about their lightweight speed-hiking boots, the Trailventure. It’s a similar last to the MTN Racer, drawn up to a mid height. The upper is ripstop mesh and the midsole is a 3-layer combination of TPU and EVA. They look really cool and are coming in some fresh colorways. They’ll be out in February in both the regular and waterproof version. The regular version retails for $140 while the Trailventure WP will be a bit more.

Although Sweden-based Salming has a larger European presence, they’re a true runner’s brand. They also have one of our favorite midsoles in the Recoil Plus. The shoes are made to last, with a durable outsole and excellent construction. The 2020 lineup features redesigns of the uppers, improving the already great EnRoute road shoe and Trail 6 trail shoe.

Thanks for following along on our trip to TRE! Hopefully, you found these shoes to be exciting as we have. Definitely follow us on Instagram and YouTube where we’ll be constantly updating our photos as we’re allowed, and of course, come back here for all the reviews.

As always,  you’ll be able to pick up most of these shoes, and any of their previous models from our affiliate partner Running Warehouse, featuring free 2-day shipping and free 90-day returns.