2/01/20 UPDATE – Note that the below patents and observations are based on past prototypes of the AlphaFly. The specific patent images in this post exceed the limits announced by World Athletics on 1/31/20. However, there are many variations of the AlphaFly patent, including variations with one plate, which will likely be Nike’s fallback on account of the WA ruling. 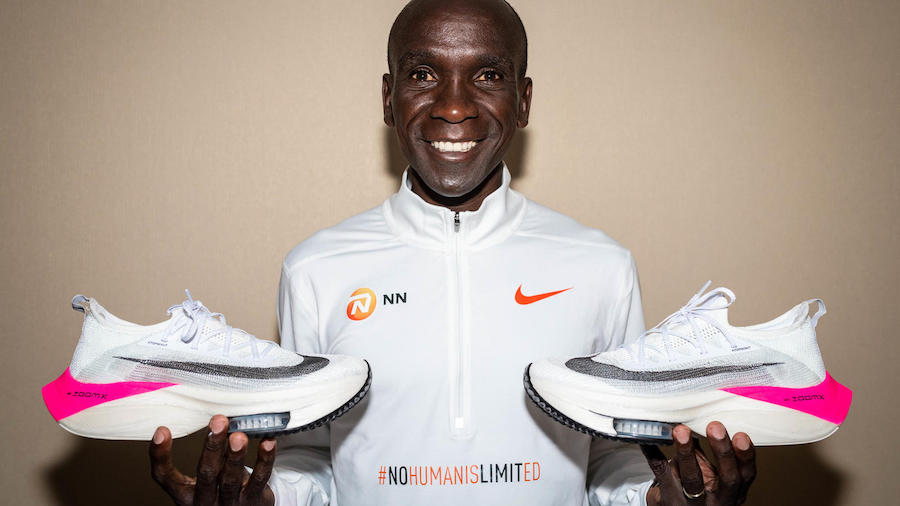 If you’ve paid close attention to the shoe worn during Eliud Kipchoge’s training for this weekend’s INEOS 1:59 challenge (and now, on race day), it’s clear that it’s far beyond the NEXT% that our Turkey Trot asses wear on race day.

As if Nike would let the greatest marathoner ever break the 2-hour mark in plain old Vaporfly NEXT% Elite.

We’ve heard rumors that this new beast seen on Kipchoge may be called the Nike alphaFLY. Whatever. A rose by any other name would smell just as sweet. Give us the good stuff. The cushion, the carbon fiber.

We’ve been dying to know more about it, but really all we knew for a while was that it was definitely chunkier, it had a segmented forefoot and heel section, and because it was on Kipchoge’s feet– it was fast.

But that was about it. That is, until we started digging around the U.S. Patent Office website, which—side note—is still built on what looks to be HTML 2 and the dazzling 16-color spectrum of 1997 internet. I actually had to buy 50 hours of AOL time to get onto it.

Anyway, somewhere in their archives is a patent application from Aug. 2018, titled “Stacked Cushioning Arrangement for Sole Structure.” Applicant: Nike, Inc, Beaverton, OR.

Within this document are several different sole designs with various iterations of midsoles and outsoles that haven’t been in production yet. What all of them have in common are pod-like cushioning arrangements combined with at least one carbon plate layer. Or even three plate layers (as you’ll see below), which is enough to make a big ol’ carbon fiber wedding cake.

We’re not going to comb through all potential iterations of this sole (although they’re all interesting), because there’s really only one we want to break down. The Kipchoge one (purportedly). The Nike alphaFLY (again, purportedly).

And while we can’t confirm with 100% certainty that everything in this breakdown is in Kipchoge’s shoe, it’s obvious that some variation of these technologies makes up the sole design.

Spoiler: if you thought the Vaporfly was a questionable “race shoe” on account of its “spring,” hoo boy are you going to have a field day with this one.

Underneath view of one of the first prototypes from last year of the new black shoe that Eliud is using. .It has since been updated. Just like the spikes, you can see black insulation tape along the midsole giving the impression it’s extra thick zoom x. We will have to wait until October to see the final version!

First off, this sole structure is a cornucopia of Nike technology. If there ever was an example of maximalism in a shoe, this is it. The wording in the patent application literally refers to the outsole composition as a “plurality of plates.”

Broken down, this sole structure features four independent cushioning pods, three carbon fiber/polymer plate layers, two layers of midsole foam, and a partridge in a pear tree. (The partridge is only available to NikePlus members).

Let’s start with the midsole.

The midsole is comprised of four different levels: a top layer of foam, a second layer of composite material, a third plate layer (possibly carbon fiber), and a bottom layer of more foam (see the image below).

Oh, but it doesn’t stop there.

Aside from the very top layer of foam and its accompanying plate layer, the rest of the sole is fully segmented between the heel and forefoot, with a sizable void between the two, partially filled in by those two layers of cushioning pods.

The segmented heel section of the shoe is basically a chunky stack of the aforementioned midsole, with two apostrophe layers of rubber for a rear outsole section. Nothing crazy there, somewhat similar to previous Vaporfly versions. However, the segmented forefoot section is where sh*t gets wild.

The plurality of plates is on full display here, as they take on multiple roles in concert with the cushioning pods.

The middle plate (246) features two tabs on both the front and back with a notch between, as well as “sockets” to hold and stabilize the top two cushioning pods. A quick note on the cushioning pods— they are either “fluid-filled” or foam, ideally pressurized between 20-25 psi. If fluid-filled, the pods will have a bunch of tensile fiber strands within them, attached from the ceiling to the floor of the pod, almost like a bunch of little flexible pillars. When the pods are compressed, these strands will flex into the spaces beside them and help absorb the force of impact. (Update: this is the version shown in the Nike promo photo).

Interestingly, it appears that on race day at the INEOS 1:59 Challenge, Kipchoge may not have worn the air/fluid-filled pods shown in the Nike promo photo, but instead wore the foam version of the pods, both of which are listed in the patent application. It’s hard to tell, since one was a studio photo with a frontal flash, while the other was taken during the fastest marathon ever in natural light.

Back to the middle plate. The tabs on this plate are configured to act as flex points, while the notches minimize the stiffness of the plate. The second (rear) notch, in particular, allows the plate to twist and/or bend within the midfoot region.

What it boils down to is this— the front of the segmented forefoot area is a sandwich of the three plates and layers of foam, almost pinched at the front of the shoe like a fulcrum. And while the top plate runs the full length, the other two plates—while secured in the front—only extend partially back. The second plate extends partially into the rear midsole segment, while the third extends just far enough to hold the bottom layer of cushion pods.

This is best seen in the side view diagram above (Figure 53-B).

All put together, the front segment almost resembles, well—a diving board.

What Happens When Running

What does all of this mean in conjunction?

I’d tell you word for word what Nike says in the patent, but with the amount of plates involved, it sounds like a “Who’s On First?” sketch by the time the paragraph is over.

Here’s my best attempt at a short version of Nike’s breakdown: on ground contact, a force is distributed first to the forefoot segment through the third (lower) plate and essentially moves its way up the pod stack as it’s compressed.

As it’s moving through the levels, it’s distributing that force through each plate layer, then throughout the midsole. The force also stops to grab a burger at In-N-Out somewhere between the third plate and fourth cushion pod.

Since they’re not fully secured to the sole, the flexibility of the lower level of cushioning pods and plates aims to create a more responsive ride, while the distribution of force aims to prevent hotspots, providing an even ride through the shoe. According to Nike, the plate structure will also provide extra stability.

Now, I can’t imagine Nike will let all that energy go to waste. And while they said nothing about the energy return in the patent application, I could certainly see how Nike’s club sandwich of three carbon fiber layers around two layers of pressurized cushions would put quite a bounce in a runner’s step.

Being the best marathoner ever also helps.

Kipchoge’s pacers wore the Nike Vaporfly NEXT% during the event, which you can pick up at Running Warehouse w/ free 2-day shipping and free 90-day returns by using the shop link below: