The Nike Odyssey React is the second running specific shoe to come out with the React midsole technology. At first blush, the upper and a little rubber on the outsole are the only noticeable differences between the Epic React and the Odyssey React. Those details didn’t seem like they add up to much, and the $120 Odyssey looks like a great alternative to the Epic React at $150. This is why we have to run in the shoes; they are significantly different shoes that I would not have noticed without putting in the miles. Thomas: I am a BIG React fan. The midsole material is soft and gives a bounce to your stride. On my longer runs, the beauty of this material shines. My legs have never felt fresher after double-digit mile runs. The Odessey React has two features that change the feel of the ride vs. the Epic React. First, and most noticeable is the amount of rubber coverage on the outsole. The Odyssey ads significant rubber to the front of the shoe on both the medial and lateral sides. Besides the rubber providing durability, it firms up the React and gives the shoe some teeth. There is a fair amount of grip on the Odyssey outsole. The stickiness gave me confidence and feedback when trying to push the pace during my tempo run. The second feature is the plastic plate under the heel, similar to the Epic React except that it dips down on the medial side to help prevent your heel from rolling inward. The tail of the midsole is less squirrely than the Epic React, but I would put this support in the mild stability control bucket. The shoe is more neutral than stability in my book. Overall the Odyssey React midsole provides a cushioned, responsive ride that is slightly firmer than the Epic React. I ran an 8-mile tempo run where I was able to hit my paces with the Odyssey, which is proof to me that the shoe is responsive enough to pick up the pace even with the softer React foam.

For those of you that tried the Epic React Flyknit and the lacing dug into your arch, the Odyssey has a soft neoprene tongue/saddle with an added strip of material that protects your foot from the flat laces. The aesthetic of the upper is top notch although I had some issues with the upper that I will cover in the “bad” section.

The weight of the Odyssey is 9 oz. 256 grams with a 10mm drop for a size 10.5 which is remarkable for the amount of cushion and durability.

Meaghan: I didn’t try out the Epic React that everyone has been raving about (or maybe it’s just ^ that guy), so I was excited to try the Odyssey. For starters, I love the look. And not just because of the Swoosh on the side. The design is simple, but comes with all the performance features you need. The upper is designed with a soft, stretchy material (a “neoprene bootie”) that’s one piece and free of overlays. They hug your feet, but aren’t restricting. It’s like wearing an elastic waistband on your feet. They’re breathable and the flat lacing system does it’s job to keep your foot secured down.

The Nike React foam feels soft underfoot, but has a nice bounce. It’s a comfortable shoe all around. There’s a shelf under the heel that provides support when your foot lands and a thin layer of rubber on the outsole which adds some durability and traction. Considering the added stability and 28 mm stack height, the shoes are super light; my W7.5 came in at 6.80z. 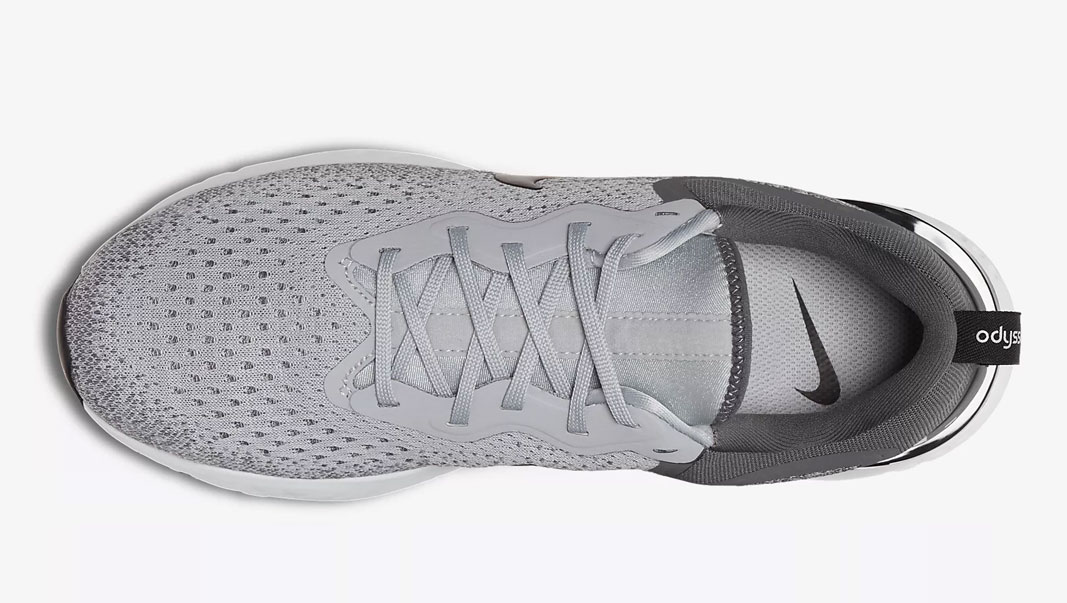 Thomas: The upper of the Odyssey is a miss for me. I had to go with my thinnest socks to feel comfortable in the shoe. Since I have narrow feet, I thought Meaghan was going to hate the fit with her broad flippers. She had no issues, so I am at a loss. During a 15-mile run, the shoes gave me a bruise on the bone right behind the big toe right where the neoprene bootie is stitched in, and let’s talk about that saddle of neoprene. It does an excellent job of securing your foot, but hell no when the summer temps and humidity hit the Mid-Atlantic. In 60º F temps, my feet feel warm in these shoes. I will pay the extra $30 for the Epic React.

Meaghan: I don’t have anything negative to say about the shoe, other than it’s nothing phenomenal. I think with all the hype over the Nike Epic React, I was expecting this incredible shoe, and while it’s a great daily trainer, there are lots of great daily trainers… Thomas: Even with the issues I had with the upper, the ride of the Odyssey React is still frickin’ sweet. I can’t wait to see what else Nike does with the React material. I would stab someone for a Streak 6 upper with React midsole and a snappy plate. I would also like the Epic React with a little of the rubber on the outsole like the Odyssey. People that did not like the fit of the Flyknit upper Epic will enjoy the more traditional feel of the Odyssey’s upper. I found it too snug, but like I mentioned Meg with her big volume feet had no problems.

Meaghan: I’ve enjoyed running in the Nike Odyssey React. I’ve also enjoyed lounging around in them. I love the look and I love the way they feel underfoot. I actually think the React foam has a similar feel to the New Balance Fresh Foam, particularly in the Zante 4… but a little better. If you’re a fan of Nike, and you’re looking for a new daily trainer, this is a solid option. Even if you hate running in them (which you won’t) you can look great heading to the grocery store.